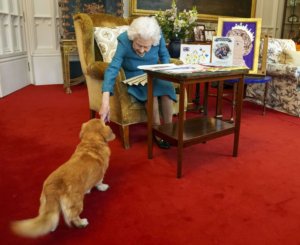 Queen Elizabeth’s Corgis Were a “Godsend” During the Pandemic

Queen Elizabeth II is joined by one of her dogs, a Dorgi called Candy, as she views a display of memorabilia from her Golden and Platinum Jubilees in the Oak Room at Windsor Castle on February 4, 2022 in Windsor, England.

(Note from Robin. The next female stray Bichon that we get into rescue, will be named “Lillibet”.)

Gem of the Day: ONE of the chaplains of her late Majesty, Queen Victoria, had been preaching on the Second Coming of the Lord, and afterward, in conversation with the preacher, the Queen exclaimed: ” Oh! how I wish that the Lord would come in my lifetime! “

” Why,” asked the chaplain, ” does your Majesty feel this very earnest desire?
The Queen replied with quivering lips, and her whole countenance lighted up by deep emotion-
” I should so love to lay my crown at His feet.”
Dear Small Pawsers,
We have some happy updates for you, as well as a need for help with paying for monthly medications for some of our long term Fosters.
But first, we want to let you know that our 2022 Online Holiday Auction will be running from Monday, October 31, 2022 through Sunday, November 13, 2022. If you have any items that you want to donate in advance, please contact our Auction Webmistress Extraordinaire, Jody Ferraro at jlaferr@aol.com!
We haven’t had anything exciting happen, in over a month. No hit by cars. No one needing surgery. ((BREATHE)).
But we do have costly monthly expenses happening for several of our dogs and some of them need to be compounded. (The meds, not the dogs.) 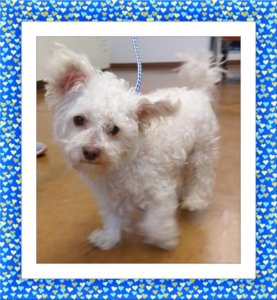 One of our dogs in North Texas, with Vicky Taylor at omalou@aol.com, is named Coco and he has a darling personality! He is such a love bug! But, though he’s only four years old, he has seizures that are so odd that even the Neurologist hadn’t seen anything like them.
They aren’t the typical Grand Mal seizures that we know. This little one goes into fits of barking 15-20 times a day, UNLESS he’s on his seizure meds and mild sedatives.
His meds are running about $100.00 a month.
It may not seem like much, but when added to our other monthly meds for other dogs, the cost is running between $450.00-600.00 a month, every month.
Yikes. I don’t know what else to do but to let you all know and hope that someone can help with these monthly medication expenses.
We have a few long time fosters. You all know how normal monthly expenses like Heartworm preventive, and flea and tick prevention are. Multiply that by every Bichon or Bichon Mix that comes into rescue.
Then if one has a chronic condition like diabetes, seizures, or even pain management, the costs have skyrocketed like everything else.  Everything is going up, including veterinary costs and meds for these precious dogs. 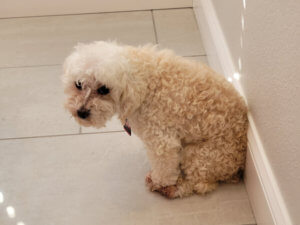 This is “Pup” an owner surrender being fostered by Mike and sally Montgomery, near Dallas. This little girl came into rescue in such pain that the vets couldn’t examine her without sedation.
She seemed to just hurt, everywhere. She had trouble walking and we began to suspect something neurological. UGH.
One of our great surgeons, Dr. Skip Tangner, did a spinal tap on her under general anesthesia.
It wasn’t neurological. Skip suspected a bulging, not herniated, but bulging against her spinal cord, disc in her lower back. Yup, that would cause pain everywhere.
So we have had her on strict cage rest, muscle relaxants, pain injections, and pain meds and it’s working!
But because of her small size, 8 pounds, we need to compound some of these and Pup, alone, is costing around $150.00 per month, in meds. Hopefully, she won’t be on this regiment for too many more months. This is an update from her foster parents, long time Small Pawsers, Mike and Sally Montgomery.
“Robin;
Wanted to provide a quick update on Pup – she is about half way through her injection series at the vet’s and Sally met with the doctor yesterday.
The original treatment plan had been to reduce her pain meds down by about 50%, and go to using muscle relaxants only as needed.  We started that process last week; by Friday Pup was in trouble.  Would not move from bed, follow Sally, and squealed when touched.  So she reached out to the vets office, and they decided to go back to the full medication levels.  She’s came back after a day or two and is back to “normal”.
Sally discussed things with the vet, and they are leaning to keeping her on full medications at this point.  We can’t tell for sure if the injections are helping with mobility for certain, but the vet does believe that they are helping her, so we are continuing along those lines. Mercifully we haven’t had any further major bouts of diarrhea as we did after the second shot.
We are still concerned at this point as to long term care/pain management with Pup. Not sure what your thoughts are on this front, but we can definitely say that without meds she isn’t the happiest girl in the world.
Pup is doing fine and is happy as long as we manage her pain.
Thanks again, will update as we know more.
Mike” 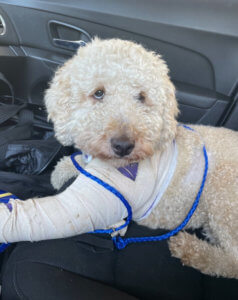 Next, remember Baxter, who came into rescue from a shelter near Chicago with a broken front leg? Two year old “Baxter” was found as a stray, hit by a car near Chicago. Thanks to all of your donation and prayers, Baxter had surgery to repair his leg and today he’s doing well! Wanna see him WALKING now? Many thanks to all of you and to his foster Mom, Elizabeth French! 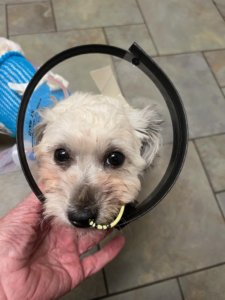 Next, remember little Poppy, who slipped her E-collar at the vet’s office and chewed her stitches out? She was in very critical condition and needed emergency surgery. Here she is today, at her foster home, with her littermate, Blossom. They are a bonded pair. 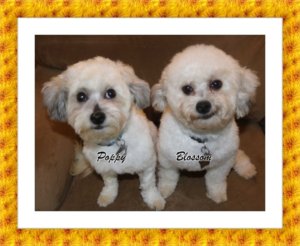 Their Foster Dad, Davis Rann, has been teaching the girls some manors in this short video!

Thank you so very much for saving Poppy’s life! 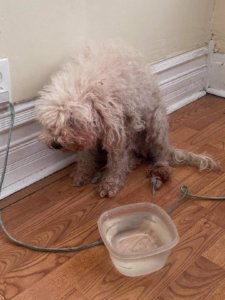 Lastly, you may remember that we took in a little female in Chicago, several months ago. She was sick, dejected, and filthy. I wanted her to have a beautiful name, so I named her “Lucia” ((Lu-chee-ah)

But, no one could get her name right and it was almost turning into “Lucifer” so we shortened it to “Lucy”.

Lucy also had a heart issue and it was one that I myself have. She had sick sinus syndrome, where her heart rate would drop very low. We almost lost her during spaying, but brought her back and got her to a veterinary cardiologist.

Our Lucy needed a pacemaker, just like I did. Wow! Does a pacemaker make you feel better! (Mine is named “Thumper” and I take him everywhere…)

So, we raised funds for her pacemaker surgery, our very first since we began in 1998.

But, the cost of the surgery was just one expense. While we waited for months to be able to get on the Pacemaker schedule, (There was a while when there was a shortage of veterinary pacemakers and they were actually using donated human pacemakers on larger dogs) Lucy had to see the Cardiologist numerous times for a recheck Echo and evaluation for surgery.

Last week, they had to turn down the pacemaker to prepare her to have her teeth cleaned.

Yesterday, she had that done and tomorrow, she will go back to Medvet in Columbus Ohio, to have her Pacemaker set permanently. she will be groomed on Friday and then she is being adopted by a wonderful woman who herself…wait for it…HAS A PACEMAKER AND LIVES TEN MINUTES FROM LUCY’S CARDIOLOGIST! GOD THING!

Her new adopter, Susan, already uses Lucy’s vets at Medvet Ohio. This was a match made in heaven!

Lucy has been fostered by two amazing ladies at their respective homes.

Our Ohio Team leader and Member of Small Paws since 2003, Sharon King, and one of our fabulous and very impressive volunteers, Kristen Skagle have been caring for Lucy for months, now.

It’s taken them both to be able to get her to her many Cardiology appointments, work around vacations, etc!

Well, that was Lucy then. 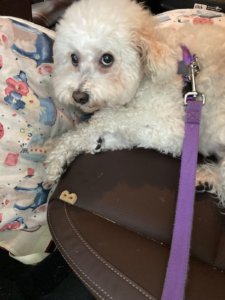 This is a picture of Lucy now.

She is such a happy girl!

It has been a long and winding journey for Lucy and both of her Foster Moms.

She goes to her forever home this weekend, and there her life really begins. And it’s all thanks to you!

If you can help with out monthly medications and ever mounting vet bills, we do so appreciate you!

I know it’s not something exciting, but it’s part of caring for them, and if we take them into rescue, we MUST care for them.

Whatever it takes. Saving one life at a time. All My Love, Robin