Gem of the Day: A person often meets his destiny on the road he took to avoid it.

(Scroll down for pictures and special music for the occasion)

This is a personal newsletter to let you know about something that has happened to my husband Dale and I. Our lives are about to be changing.

Dale and I are welcoming a special new bundle of joy into our home. Sally Ann Pressnall, is now six months old, and if anyone would have told me this would be happening to us now, at our age, well, I’m just not sure I would have believed it.

I am still trying to get used to the idea of having a little girl living in our home, oh my!

You may remember this newsletter of May 19th. When I see you all around the country, many of you always mention remembering this particular newsletter.

It was when I told you all about the day our nearly 14 year old St. Bernard, Bogey went home to heaven, on the same day that three of our other furbabies had eerily made the same journey in previous years…all on May 19. 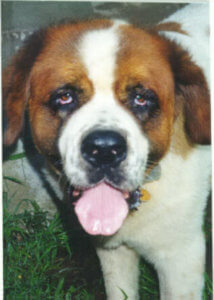 Since that day last spring so many of you have offered your loving words of encouragement, sympathy cards, phone calls, and e-mails for Dale and I and we can’t thank you enough for that.

Dale used to go running with the St. Bernards, and go biking with them in the woods. Bart, our remaining St. Bernard is now 14, and STILL runs with Dale, can you believe it???

Just a couple of weeks ago, Lynda Dehart, our transportation secretary, called me to see how we were doing since Bogey left us. Now Lynda is more than just a dear friend to Dale and me.

She is one of those “has seen you in your nightgown while you were barfing your brains up” friends. We make a point to see each other several times a year. Either I go to her home and of course she has been here to our home several times as well.

Lynda called, and getting the names of our two St. Bernards mixed up in her mind, (and worrying about how BART our remaining St. Bernard was doing) sweetly and softly asked, in her most precious southern belle accent….”Robin, ….how is Bogey doing.?”

Without missing a beat, and KNOWING that she had the two dogs’ names mixed up, I dryly replied, “Well, he’s still dead.”

Now there are some people you just KNOW in advance it is alright to tease like this with, and Lynda is one of them. You should have heard her try to decide to laugh, apologize, hang up and hide under the bed or to bop me one through the phone. I still tease her about it to this day.:)

The weeks went on, and we were blessed to be offered several St. Bernard puppies over the summer from various rescue groups and shelters.

Already having five dogs, neither Dale nor I felt the time was right to add another dog to our family.

Fast forward to about 3 weeks ago. Dale had to drive to Nebraska on business. He borrowed Gracie, the GPS system, that tells you to “turn right, turn left, or continue on the current road” for the trip.

He doubted Gracie was correct when telling him the fastest way to come back home to Tulsa, (down 1-75) and so he went off on his own, choosing to come home on Highway 169, instead.

That’s when it happened. On this two lane fast moving highway, out in the middle of no where, with the nearest house or business being a good 10 miles away, outside of Inola, Kansas, Dale saw a black mixed breed pup trying to get croaked by two 18 wheelers, one coming from each direction. ZOOOOMMMMMM, HONKKKKKKKKKKKKKKK, and WIZZZZZZZZZZZZZZZZZ!!!!!!!!!!

They would wiz past this poor frightened, wormy, starving pup, and she would lie down on her back, wagging her tail in submission, IN THE MIDDLE OF THE HIGHWAY WITH TRUCKS ZOOMING PAST HER ON BOTH SIDES AT 75 MILES AND HOUR DO YOU GET MY DRIFT HERE???

Well, Dale screeched on the brakes. He said I would have had a heart attack and died right then and there if I could have seen how close she was to becoming a Kansas Flat Dog.

As soon as he opened the door to his truck, she jumped in and climbed into his lap, which he said was a good thing because the huge trucks weren’t slowing down and his truck was stopped in the road while one was coming straight for HIM.

He called me on my cell phone while I was in Southern California at the Long Beach Bash and told me this heart stopping tale.

I assumed he would bring this not really so little stray, who had obviously been dumped, home and after Dale and I paid to vet her, we would ask ARF or one of the other all breed rescues to place her in a loving home.

Well, sometimes life is what happens to you when you are making other plans. Each time I would mention calling one of these all breed rescue groups, he would get this “sick puppydog look” in his eyes.

He told me that when he even thought of placing her…he just felt like crying. Now for my big strapping hunk of a husband to say this, well, basically I knew that this meant…WE NOW HAVE ANOTHER DOG FOREVER AND EVER AMEN.:)

I want to introduce you all to…Sally Ann Pressnall, approximate age 6 months old. Dale and I had her spayed and vetted on Monday and she is now OURS.:)

Sally runs with Dale and Bart in the mornings, and goes with them in the woods, when Dale bikes. During the day, she is up there under his desk in his office while he is working. She is up there with him right now.

The Bichons aren’t quite sure what to make of her yet, and I swear she is growing each time I look at her. I think she may be part Irish Wolf Hound.

You all know how much Dale does for Small Paws, and how much he loves and supports me…and if he didn’t support this work, our magnificent obsession, 150%, we would all be in BIG trouble. Trust me on this one.:)

I guess I am lucky he didn’t bring home a giraffe or an elephant, (you all know that’s the kind of animals I see in the road at night) or we would have one of THOSE named Sally Ann Pressnall.:)

Ok, without further ado…here is our newest baby girl. Hey! We have a girl now! Five boys and one girl!:) I am a Mama to a GIRL now! Love, Robin 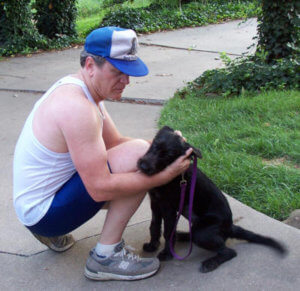 A boy and his dog after their morning run. 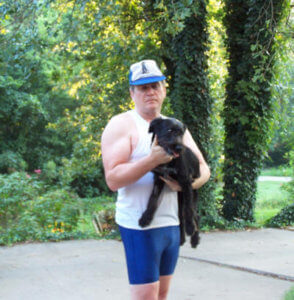 She really is a sweetie.:) 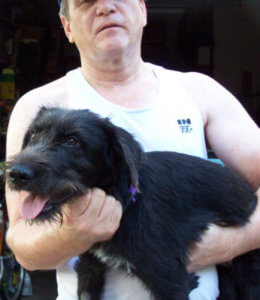 You can’t tell it here but she has wired hair…

He carries her around like this, while asking me…”Do you wanna HOLD her?” I have never seen Dale this excited about a dog, and I have been married to him almost 19 years.:)

There is nothing that is wrong
In wanting you to stay here with me.
I know you’ve got somewhere to go,
But won’t you make yourself at home and stay with me?
And don’t you ever leave.

The sun ain’t nearly on the rise
And we still got the moon and stars above.
Underneath the velvet skies,
Love is all that matters. won’t you stay with me?
And don’t you ever leave.

I long to see the morning light
Coloring your face so dreamily.
So don’t you go and say goodbye,
You can lay your worries down and stay with me.
And don’t you ever leave.

If you ever love an animal, there are three days in your life you will always remember….

The first is a day, blessed with happiness, when you bring home your young new friend. You may have spent weeks deciding on a breed. You may have asked numerous opinions of many vets, or done long research in finding a breeder. Or, perhaps in a fleeting moment, you may have just chosen that silly looking “stranger” in a shelter — simply because something in his eyes reached your heart.

But when you bring that chosen pet home, and watch it explore, and claim its special place in your hall or front room — and when you feel it brush against you for the first time — it instills a feeling of pure love you will carry with you through the many years to come.

The second day will occur eight or nine or ten years later. It will be a day like any other: routine and unexceptional. But, for a surprising instant, you will look at your longtime friend and see age where you once saw youth. You will see slow, deliberate steps where you once saw energy. And you will see sleep when you once saw activity. So you will begin to adjust your friend’s diet — and you may add a pill or two to her food. And you may feel a growing fear deep within yourself, which bodes of a coming emptiness. And you will feel this uneasy feeling, on and off, until the third day finally arrives.

And on this day — if your friend and God have not decided for you, then you will be faced with making a decision of your own — on behalf of your lifelong friend, and with the guidance of your own deepest Spirit. But whichever way your friend eventually leaves you, you will feel as alone as a single star in the dark night.

If you are wise, you will let the tears flow as freely and as often as they must. And if you are typical, you will find that not many in your circle of family or friends will be able to understand your grief, or comfort you.

But if you are true to the love of the pet you cherished through the many joy-filled years, you may find that a soul — a bit smaller in size than your own — seems to walk with you, at times, during the lonely days to come.

And at moments when you least expect anything out of the ordinary to happen, you may feel something brush against your leg — very, very lightly.

And looking down at the place where your dear, perhaps dearest, friend used to lay — you will remember those three significant days. The memory will most likely to be painful, and leave an ache in your heart… As time passes the ache will come and go as if it has a life of its own. You will both reject it and embrace it, and it may confuse you. If you reject it, it will depress you. If you embrace it, it will deepen you. Either way, it will still be an ache.

But there will be, I assure you, a fourth day when — along with the memory of your pet — and piercing through the heaviness in your heart — there will come a realization that belongs only to you. It will be as unique and strong as our relationship with each animal we have loved, and lost.

This realization takes the form of a Living Love. Like the heavenly scent of a rose that remains after the petals have wilted, this Love will remain and grow — and be there for us to remember. It is a love we have earned. It is the legacy our pets leave us when they go. And it is a gift we may keep with us as long as we live.

It is a Love which is ours alone. And until we ourselves leave — perhaps to join our Beloved Pets — it is a Love we will always possess.