Skip to content
Home / News / Uncategorized / Precious Female Bichon Is In Trouble. Help Needed To Try To Save Her. Meet Darling “Lilibet.” 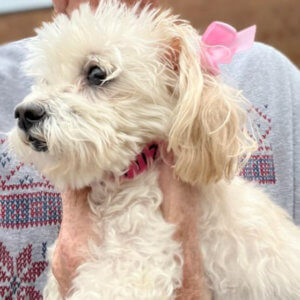 Gem of the Day: “No Time For A Gem. We have a medical emergency.” 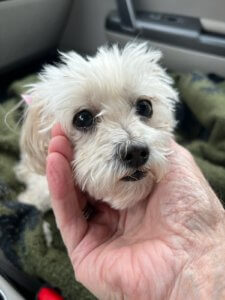 We were contacted by the CACC shelter in Chicago yesterday about this little female. There were no medical notes with her, which was odd.

She was found on the street as a stray, recently groomed, with a pink bow in her hair, yet with no identification, no owner was contacted so they could come to claim her, and her stray hold time was up.

SPR Volunteer, Davis Rann, went to get her and he knew she was sick by her cough. He got her to our vet, Dr. Paul Blasso immediately.

We knew something was terribly wrong.

X-rays revealed fluid on both lungs and our vet was thinking this could be congestive heart failure.

“The most common clinical sign of congestive heart failure (CHF) is persistent coughing accompanied by difficulty breathing. This is due mainly to pulmonary edema or the accumulation of fluid in the lungs.”

So he started her on Lasix.

But she has other issues going on and we are trying to save her. She also has a grade 3-4 out of six heart murmur. 🙁

That’s another reason we were thinking congestive heart failure.

The fluid is in both lungs. She may have double pneumonia.

We are waiting for radiology to tell us if they can tell which one it is.

Regardless, we are treating her for both. Lasix for the fluid in her lungs and four kinds of antibiotics if we are fortununate enough for it to be pneumonia. That’s curable. Congestive Heart Failure isn’t. 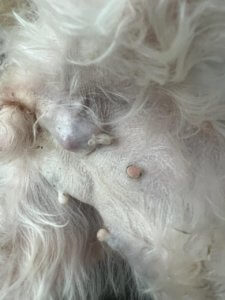 If it isn’t CHF, and we can get the pneumonia, after recuperation, we could biopsy the two masses on her mammary glands. There is a 50/50 chance that they are benign.

We may need to take her to one of the Emergency Hospitals for observation tonight.

We’ve recently taken in several dogs that didn’t have anything out of the ordinary wrong, and we were almost able to pay to vet them using our monthly donations.

Now, Lilibet needs extra help. I think I know you well enough by now that I think you would at least want us to try.

And, after all of these years, I think you know me well enough, that you know that I don’t ask if we don’t need help.

Now, none of us know how this is going to turn out. There are so many ways it could go wrong.

But we need just ONE way for it to go right.

And, we happen to know the Master of Miracles on a first name basis!

He’s given us so many miracles over the past 24 years, for both our dogs and for the people who love them.

I don’t know about you, but I’m going to ask the Great Physician for one more of His miracles. All My Love, Robin

Revelation 5:13
Then I heard every creature in heaven and on earth and under the earth and on the sea, and all that is in them, saying:

“To him who sits on the throne and to the Lamb
be praise and honor and glory and power,
for ever and ever!”