Gem of the Day: “No one appreciates the very special genius of your conversation as the dog does.” ~Christopher Morley~

Now, we have NINE new dogs. The seven listed below and two more are coming in this week, down near St. Louis.

Two sisters, 4 and 5 years old. One supposedly has an enlarged heart but hasn’t seen a cardiologist yet, so that will be first on the agenda.

We have two matching challenge donations for the seven listed below and the two coming in. First, from the Sunshine State of Florida, we have this challenge for $100.0 from Deborah Berger. Is there anyone who can match her? Thank you Deborah, again!

Sent from my iPhone>

Next, we have a very generous challenge for $1000.00 from Janet Bartos. Janet thank you so very much and I’m hoping that someone can turn your $1000.00 into $2000.00 for these injured and infirm dogs, whom we are so blessed to have! Giving them a chance at a wonderful life is a gift in itself.

This is such very sad news and we must help these furry babies!  I will issue a matching challenge for $1000.  Hope we can raise it all quickly!!  Prayers for you and all these precious babies! 🙏🏻🙏🏻🙏🏻

Bentley is having his crushed and “broken beyond repair” front leg removed this morning at The Roanoke Animal Hospital in Roanoke Texas by our long time vet,  Dr. David Shepherd.

His clinic gives us a 30% rescue discount. They are wonderful to our dogs and to Small Paws!

Pearl will have her back leg amputated next week.

Oliver has a fungal infection on his skin and that will take some time to treat.

Several of them have ear infections, which are being treated.

Next week, Lucia travels from Chicago down to Columbus Ohio, to begin pre-op procedures in order for her to get her pacemaker. A first for Small Paws but not for the cardiologists at Medvet. They’ve been doing this for 14 years.

Thank you all so much for building a bridge. A bridge, where they may be carried, in many cases, from catastrophe, into the loving arms of Small Pawsers, everywhere.

It’s you who makes all the difference. It’s you. All My Love, Robin

Gem of the Day: No Time For A Gem Today. Medical Emergencies. 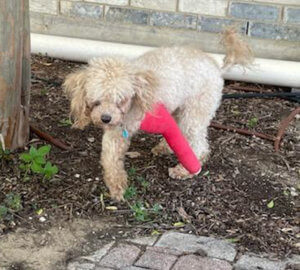 Meet one year and two days old “Bentley.” He was an owner surrender with a microchip. His owners couldn’t afford surgery on his leg with multiple fractures and it was left this way for over a month. The vets say he was hit by a car to do that much damage. His leg is being held together with this splint.

Please bear with me here. I am pretty stressed and that doesn’t happen very often to this extent.

This past weekend has been unbelievable. I’ve been operating on about two hours of sleep a night with dogs falling from the skies and needing emergency care. When you have to speak to ER vets in the night, sleep is elusive.

We are having issues finding both volunteers and veterinarians who are accepting new clients in South Texas. That’s a huge problem when we have emergencies in San Antonio and Austin.

Are we in a veterinary workforce crisis?

Not only do we NOT have a veterinarian in San Antonio who is taking in rescue clients, due to staffing shortages, NINE San Antonio volunteers have either moved or retired in the San Antonio area. Nine. Some of our best volunteers are no longer near San Antonio. (The sound you hear is the thumping of my heart. Seriously.)

If you know someone who would like to be a volunteer foster parent or transporter in either San Antonio or Austin,TX.,  this is the application.

And IF you are in Texas, can you please ask your vet if they might consider taking us on as a client? We have excellent references from other vets and veterinary schools and hospitals. We pay our bills on time and have for 24 years.

For the first time in our 24 year history, we had to beg and borrow a volunteer from another rescue to pull two dogs from a shelter in San Antonio and it was a nail biter. 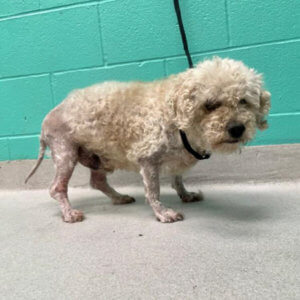 “Bear” was 45 minutes away from assuming room temperature, due to a lack of space. Bear has possible dry eye and bite marks from being attacked by something, probably a larger dog.

South Texas Team Leader, Jody Ferraro and Co-Team Leader, Michelle Morgan, and I were beginning to panic as we watched the clock heading for 12:30 p.m. when “Bear” was scheduled to be euthanized.

Thankfully, a volunteer with the shelter made arrangements to get Bear, along with this little guy, “Oliver” to us. Many thanks to “Gabby” and to our volunteers, Rachel Reynolds, and Phil and Judy Kerns for saving these two lives. 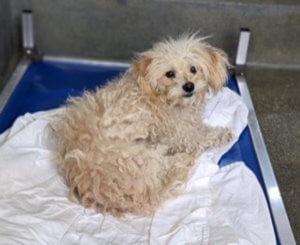 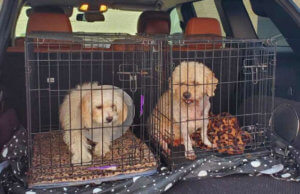 Oliver and Bear on the way to being medically boarded at A Crate Escape in Round Rock TX., until Tuesday when our volunteers Phil and Judy Kearns will meet Ann Roemerman, who will take them to our great vet, Roanoke Animal Hospital in North TX., where all four will be vetted.

They give us a 30% rescue discount there.

Then in North Texas, we have two dogs with old fractures and broken legs.

Meet one year and two days old “Bentley.” He was an owner surrender with a microchip. His owners couldn’t afford surgery on his broken leg and it was left this way for over a month. The vets say he was hit by a car to do that much damage.

Volunteers Kirk and Vicki Taylor (Formally Vicki Furstenburg but they just got married!) spent 10 hours with Bentley at an ER in Plano TX. That’s when he got the red splint. Until then it was gangling by the skin.

X-rays, a radiologist report, and a phone call with my friend and Board Certified Surgeon, Dr. Skip Tangner, all tell us that we are going to have to amputate. There are fractures from the top to the bottom of that leg. 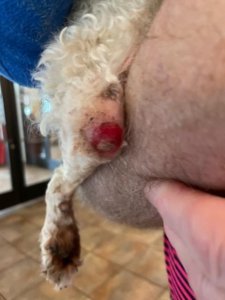 And this contusion on his knee has been open for over a month. There isn’t enough skin to cover it, if the leg could be saved. Skip told me it was infected as well. He will feel so much better with this leg gone and dogs do very well with three legs. 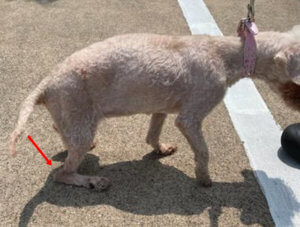 Then, (Are you exhausted yet?) also near Dallas, under the direction of Team Leader Rae Steeb,  we were notified by a shelter that we were the last hope for five year old “Pearl”. If we didn’t take her it was not going to end well for her, if you get my drift. Look at your dog’s back leg and look at Pearl’s. She has an old fracture and drags the leg. It needs to come off.

That is four dogs from Texas in the last 48 hours. Two need leg amputations. All need the works in vetting.

Then in Chicago, under the direction of Team Leader Sara Rhodes, we have this little girl coming in. 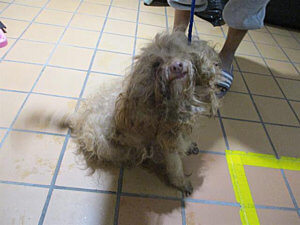 Meet “Birdie” who was in deplorable condition near Chicago. We said “Yes! We will take her!”, not knowing if she was man, monkey or mouse. 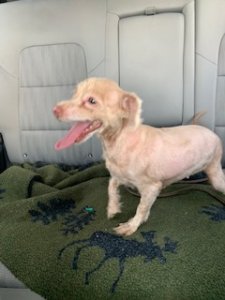 But look what was under there! That dog has met a Bichon, if ever there was one. As far as we know, nothing is busted on Birdie. Thank God.

For these five, including two amputations, I’m estimating we are going to need around $14,000.00, including the $756.04 we spent on on Bentley on Saturday at the ER and the medical boarding at A Crate Escape for Bear and Oliver for two nights.

We haven’t come so close to losing a dog that we were after in a shelter to euthanasia, like this in years.

Now that we have them, alive and almost standing on four feet, we have to pay for their vetting.

With our last newsletter, we raised only 1/4 of what was needed to vet seven dogs.

With five more, now we have three matching donation challenges! I’m hoping that will allow us to pay for these babies to be vetted!

First, from Mary Hurley at fuffernut@yahoo.com, we have this very generous challenge for $1500.00 if someone has been blessed enough to be able to match Mary, that would be $3000.00 for our latest little train wrecks. Thank you Mary! I hope that someone can match you!

Next, from Eileen Boehne at <eileen@importingsolutions.com> we have this challenge for $500.00! Thank you Eileen! I hope someone can match you!

And lastly, from my Sister-friend for almost 30 years, Barbe Von Netzer in OKC, at forest0000@aol.com, we have a phone challenge for $200.00. Is there anyone who can match Barbe?

I’m here and will issue all matching challenge donations! All My Love, Robin