These folks are givers! Notice “Steve” on the far right. He’s a retired racing Greyhound who isn’t in a hurry for anything, any more, thank God. (I whispered an apology from the people who did that to him and I swear, he laid his head against his face and gently kissed me. I got teary eyed) He has a Bichon sister, named Freda.

If you didn’t make it to the recent Florida Bichon Bash for Small Paws, hey, we missed ya! Here are some of the highlights!

This was a great crowd for the first bash since the Pandemic!

We had around 40 people with their Bichons and after a few minutes, the other breeds in attendance had met a Bichon! 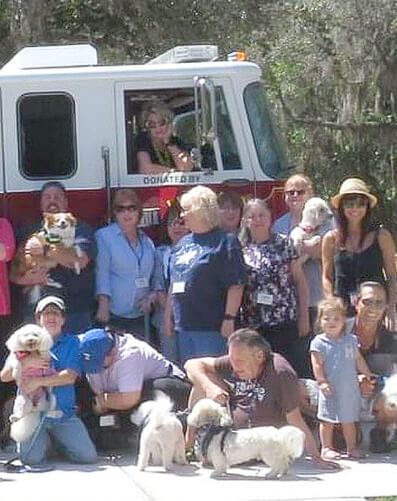 The attendees were telling me to get into the Firetruck. “GET INTO THE FIRETRUCK!!” Easy for them to say! Ha! So, Your’s Truly is seated in the passenger seat of the Firetruck, which was about 42 feet off of the ground. I managed to pull myself up into the seat…but then what? How was I going to get down? (One should think of these things, first, you know. What goes up must come down.) 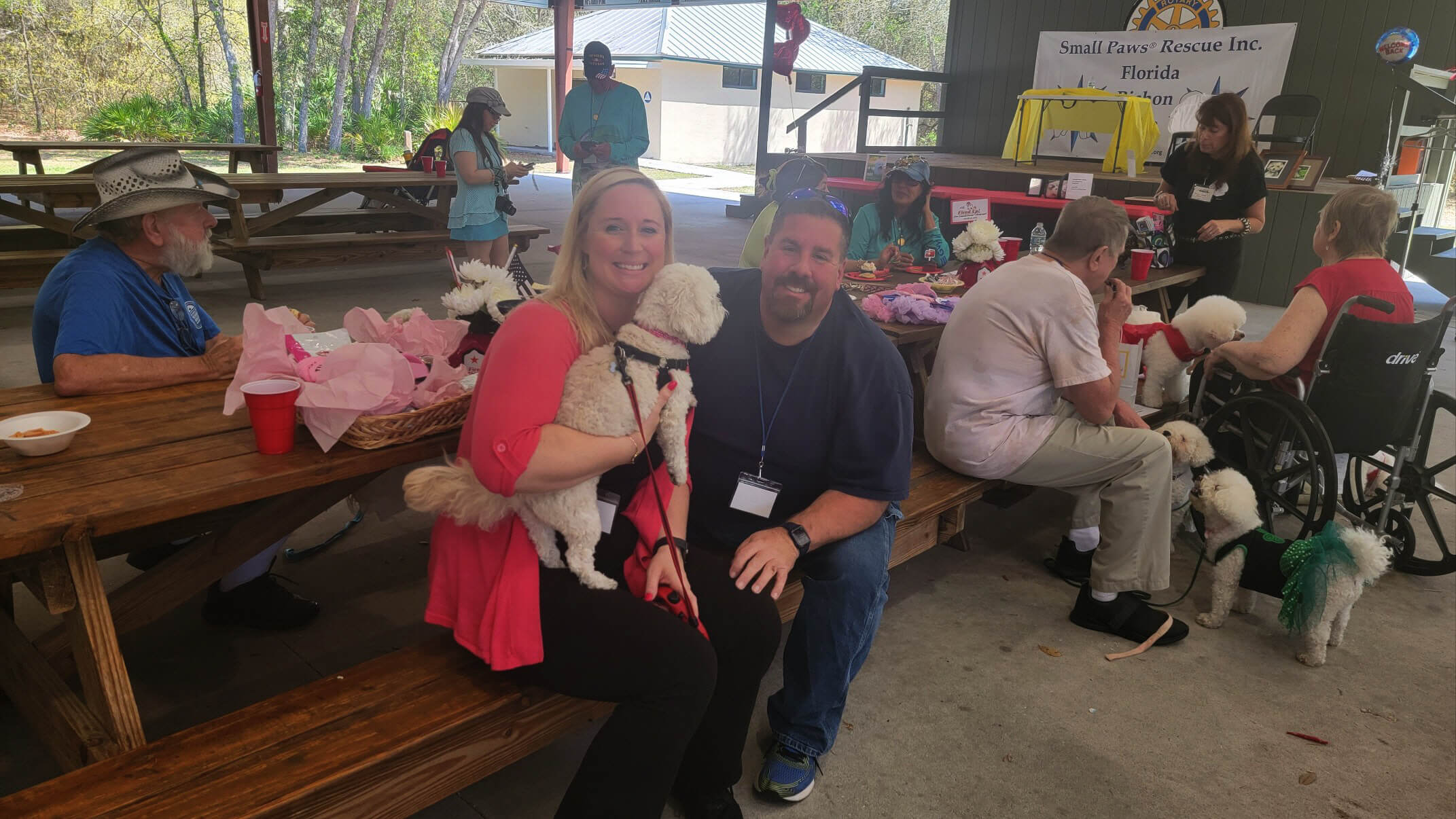 Thankfully, no pictures were taken of the Robin hoisting down event, done by long time Small Pawser, Scott Pace, actual Fireman for 12 years, lifting me back down to earth. Yes, he survived! Seated beside him is his lovely lady, Sara, who was delightful and I was glad to meet her and to see my old friend, Scott, again! They recently adopted SPR Bella after losing their little Sugar Plum in November. Bella is a heart healer! 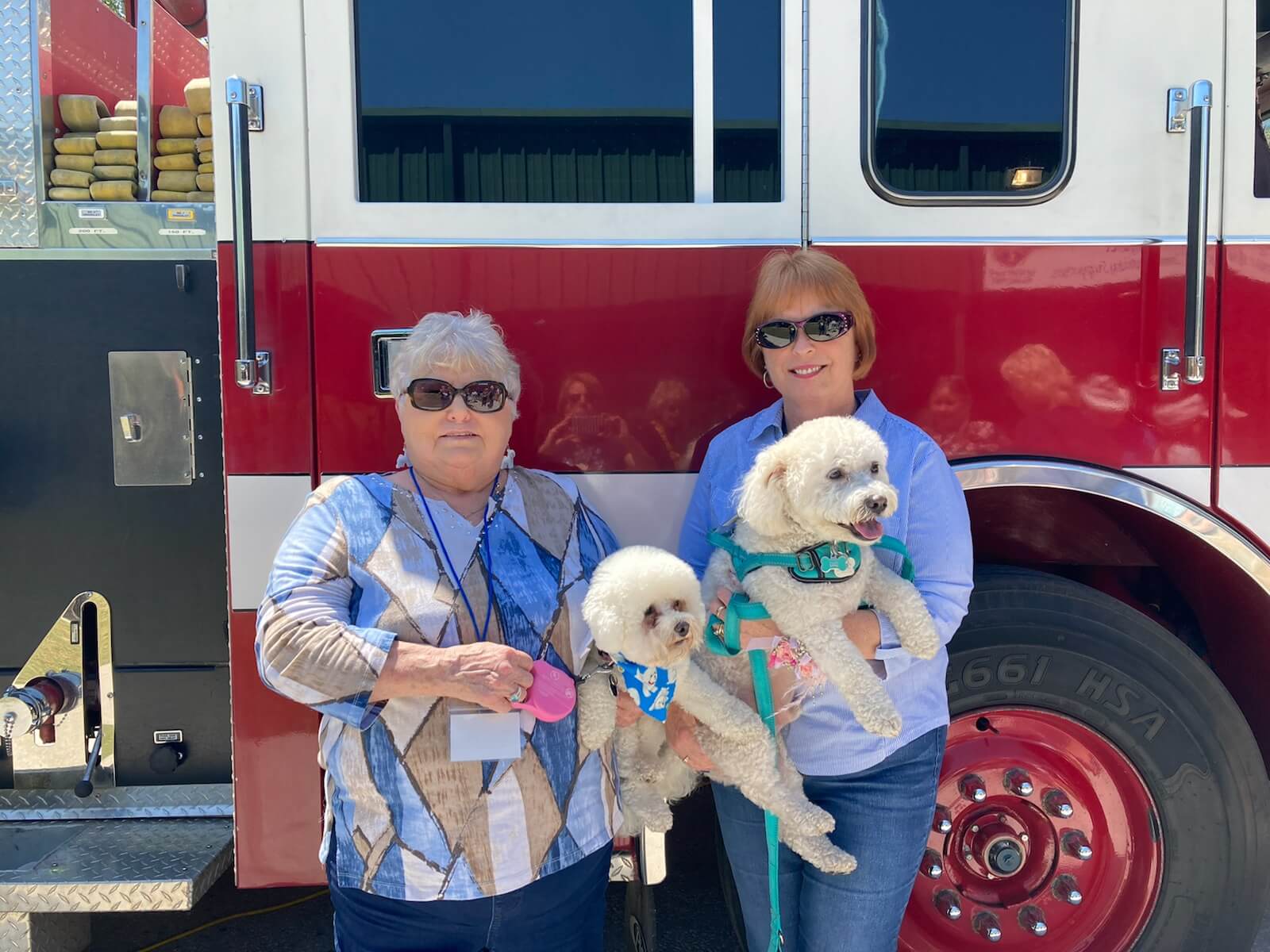 Retired Florida Team Leader, Carolyn McLaughlin, with her baby girl “Callie”, and current Florida Team Leader, Vickie Inglee and SPR fluff, “Beezer” in front of the Fire Truck! Both of these ladies worked tirelessly on this bash! Along with Vickie’s daughter, Liz, and her son, Sean, and Florida Team Members, Jackie and Rob Loftus, Jan McQuade, Bill Adam, and Norma Pruss, who worked on the Bash all the way from her new home in North Carolina! 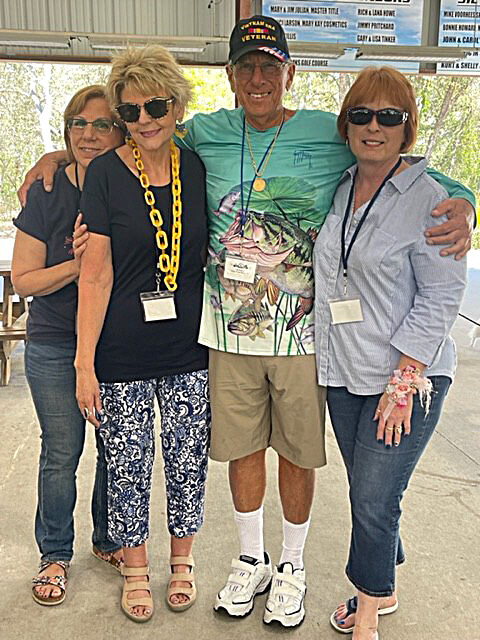 Our Director of Adoptions, and Board Member, Bonnie Ferguson, Muah (Robin Pressnall), Long Time Small Pawser, Bill Adam, and our Florida Team Leader, Vickie Inglee pose for a picture in a hurry!

So the night before, at the Pre-Bash Dinner, Bill Adam asked me to sing at the Bash.

I told him I didn’t bring anything to sing. I didn’t have anything prepared and I was so sorry.

Thennn, overnight, I had an idea.

Now you have to know that Bill and I go way back. He has rescued Bonnie and I from a sand dune in wee hours of the morning. He’s been there when I have needed him for many years. We are very dear friends.

So, the next morning, when Bonnie and I got lost (of course we did, but we were at least lost in the park) and Bill came to fetch us, I asked him how much would it be worth it to him for me to sing something at the Bash.

Without missing a beat, he answered, “A Thousand Bucks.”

Fortunately, Bonnie had been a captive audience that morning for a last minute rehearsal rendition of “Route 66” with a YouTube accompaniment on my cell phone. 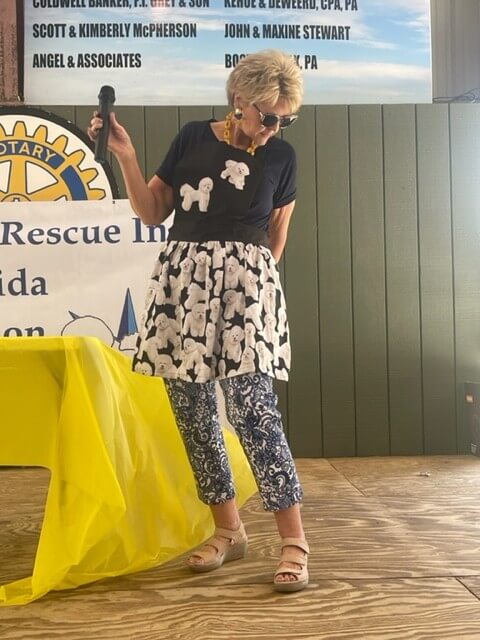 (We later auctioned that apron and it sold! Many thanks to Linda-lams, a long time friend of Vickie’s for making FIVE Bichon aprons for us to auction!) 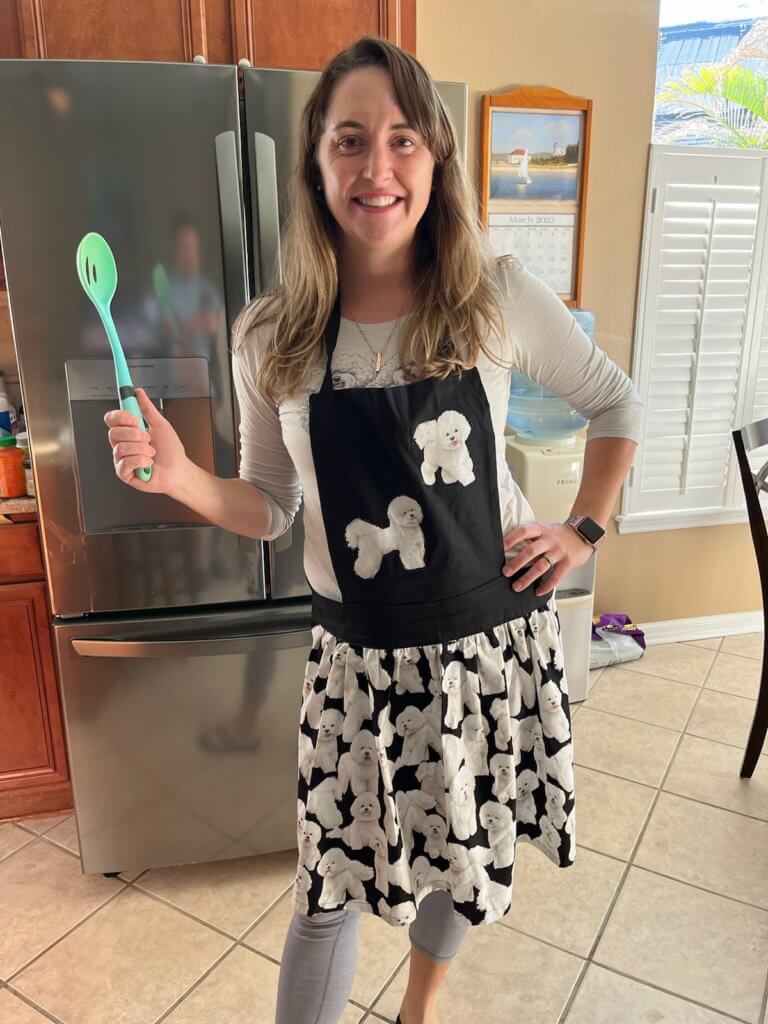 Jackie Loftus, one of the Bash helpers, models another of the Aprons! 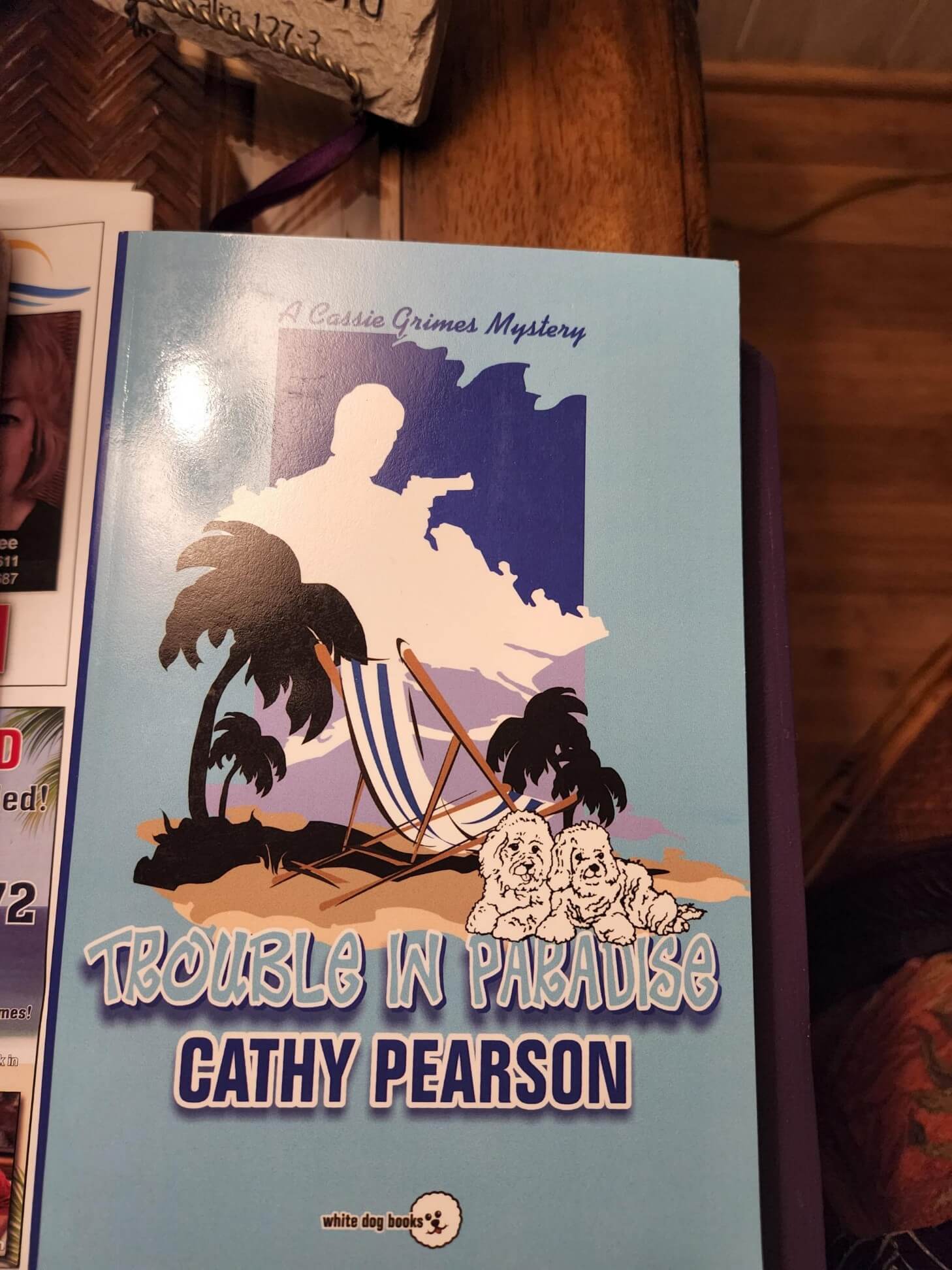 And, when they surprised me, I was completely stunned and delighted that Small Paws was mentioned in the forward of the newest novel of well known author Cathy Pearson, “Trouble in Paradise”! (There are ALWAYS Bichons in her exciting mystery novels!) 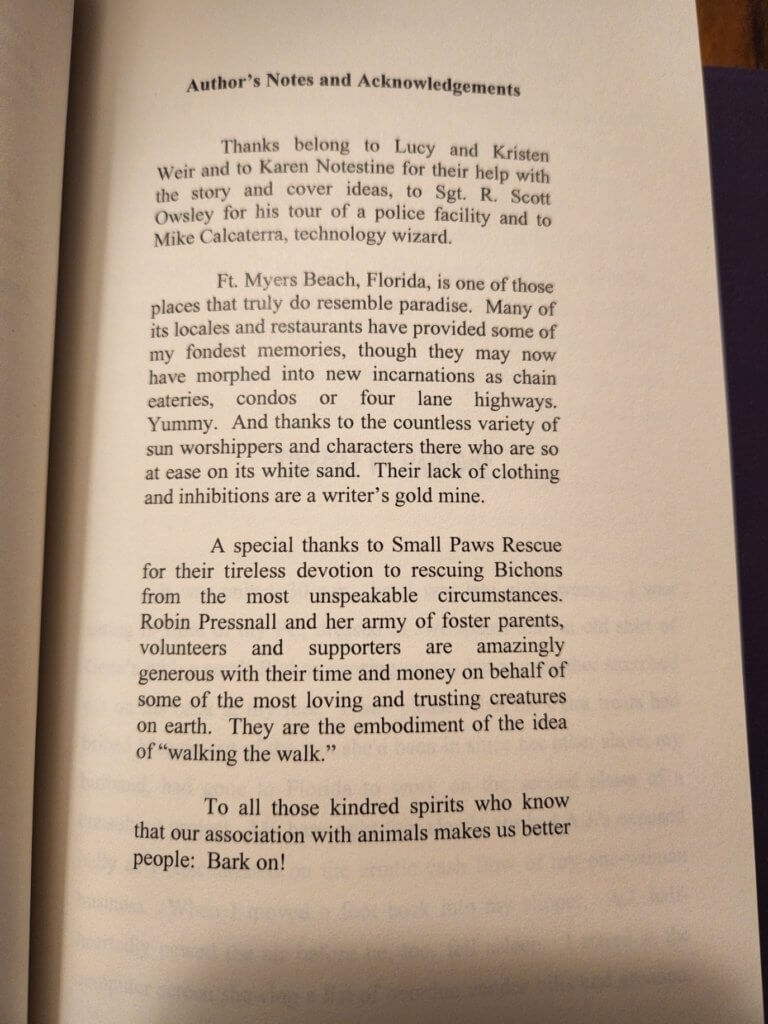 Wow, Cathy, we are all so very honored! Thank you so very much! 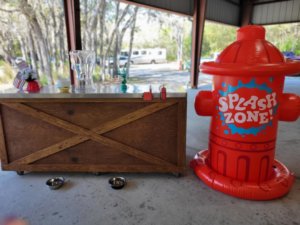 And they didn’t forget the fluffs at the pet watering station! 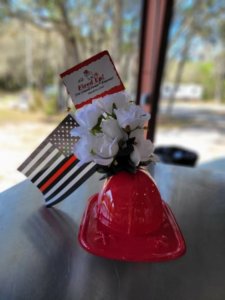 Right down to the beautiful Firemen Hat centerpieces!
So what is it with the Fire Truck Theme?!

Vickie Inglee’s son, Sean Carr is the founder and President. What a wonderful young man! Thank you Sean for all that you do and for having the Firetruck there to bring attention to Small Paws!

And Krewe De Forti helped us, too! Many thanks to the crew who came and cooked for us!
It was delicious! 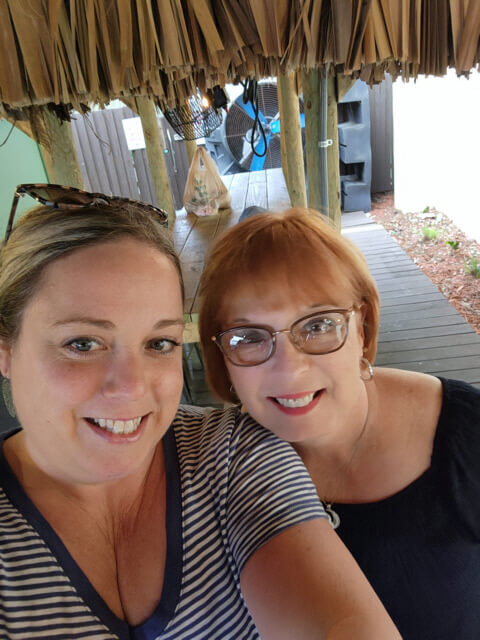 And who arranged the rental of the beautiful venue, the Rotary Pavilion at the Concourse in Shady Hills, Florida? Normally, we have to pay for a venue for our events. It was Vickie Inglee’s daughter, Liz Misemer, who is the Operations and Marketing Director for The Concourse where the Rotary Pavillion is located. Liz is also President of Misemer Marketing and serves on two local boards in Florida. Many thanks to Liz Misemer and Sean Carr and their Mom, our great Florida Team Leader, Vickie Inglee!
Vickie sure raised good kids that are givers!
Thanks to everyone who attended, donated, and told stories about their connections with Small Paws!
If you are interested in hosting a local Small Paws Bash in your area, send an e-mail to robin@smallpasrescue.org and let’s talk!
All My Love, Robin