We got word of this poor creature, who was dying in a California shelter, over the Labor Day Weekend. This is how we learned of “Amazing Grace”…

<Date: 9/2/2001 4:51:33 PM Central Daylight Time
From: Barbsand@aol.com
To: Pup3@aol.com
K Carol, here is the little girl who we have a rescue hold on — the one you sent a picture of to check out — she looks a little different from the picture you sent ’cause I think they trimmed the hair around her face — her No. is: A0924287 (listed as 6 year old female) — may change that ’cause I don’t feel that anyone is going to take this little girl and we need to get her out of there quick (she’s been in the observation area) — can’t get her until the 4th.
She isn’t in good shape. I called Sandy in a panic ’cause when I first saw her she could barely lift her head and wouldn’t move her back legs — they looked broken. What I come to find out is that she has a very bad “skin condition”. It has affected all of her body but mostly her back legs and tail (which looks like it has been broken). She is very skinny and weak. And her skin is BLACK from dirt and probably fleas. When the officer opened the gate for me, she hobbled over to me and let me hold her — she just settled right into my arms. After I put her down she kept trying to raise up to me but was a little weak. She is gentle as a little lamb. Her eyes do look a bit cloudy but not too bad. Bichon eyes (brown with beautiful halos) and tail and a Bichon nose 😉
Here are her pictures… (sorry they’re a little dark)
(By the way — I’ve called her “Grace”)>

Thank God, we were able to convince a Police Officer to let us go into the shelter when they were closed, and get this poor dog out of there. The word “DEAD” was written on a card on her cage, and no I am not kidding.
I just got this from Sandy Sowell….I think we got to Grace in time…I am thanking God for His Amazing Grace.:)) I just know that Grace is going to bless someone’s heart..in a mighty, mighty way.:)

<Subj: Re: Grace Update!
Date: 9/3/2001 4:19:15 PM Central Daylight Time
From: LitlSybil
To: Pup3
CC: Barbsand, CPTHEO4
Double-click picture(s) to display in picture editor
Things are definitely looking up! Met Sherri outside the shelter and drove directly to the vet. We’ve just come back from there and the dear woman charged me for the meds but not a dime for her exam. She checked her out, gave her shots, medication for eye infections and a female tract infection, but says while she’s badly dehydrated (probably what’s causing her to be so weak), is extremely filthy and is loaded with fleas that are sapping her strength. In a few days with care, Grace is probably going to be all right. The female tract infection is of some concern but we’ll know soon if it’s more than that. Absolutely no way to spay her until she’s stronger but says she’s a very nice little girl (11 lbs. about 6 years old) and is most likely a bichy-poo with a very sweet disposition. I’ve just given her a half can of I/D which she gobbled up, will let her rest, and then she’s going to be soaked in conditioner, then a warm bath until I can hopefully save her fur. I don’t think there’s a chance of saving anything on her legs, it’s a black tangled mess, but I’m sure I can save her head, her body, whatever I can. I’ll give her water by syringe until she thinks she’s floating, and I’ll bet by the end of the day she’s going to be a different dog with a whole new life ahead of her.
Another day in the shelter and I doubt we’d have a little fluff to talk about. Love, S>

Updates to follow.
9/4/01 UPDATE
Dear All,
Grace had a good night. When it was time for bed Jim put her right in the middle of one of those huge doggie pillows and she sank down with a visible sigh of happiness. God love her, she is already blossoming. Melts into your arms when you hold her, staggers around when she tries to walk but wants to be with you so bad she just has to do it.
It took a good 15 minutes of solid rinsing before the water stopped being dark gray, then brown and finally clear. Fleas, ticks, BUBBLE GUM, you name it, it was in her fur and stuck to her skin. She’s still not as clean as I want her to be but she’s so much more comfortable now. She was starving but the good news is she’s VERY WILLING to eat so she sure came to the right place. I’ll get as much into her as she can handle!
Has a nasty infection in her reproductive parts, eye infection, and now kennel cough but she’s on meds and will be back at the vet’s in a heartbeat if she slides backwards. With all the prayers and good thoughts that are out there for our “Grace”, she really is being cared for by angels. With love, Sandy 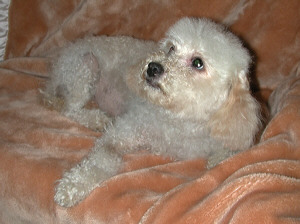 In light of all the misery that’s taken place in our country I hope no one will feel upset that I send along an update on Grace. I view what’s happening with Grace, and also Faith, as one of the things that makes this country the great nation it is. We draw a line at disgusting acts of inhumanity and won’t back away. Yes, Grace and Faith are animals but they’re lives, innocent lives. God put them here for a purpose and we have to do what we can. If I could be in New York I’d want to rip apart that building to get to the people. So I’ll do what I can and hope I’m not offending anyone.
Grace is looking a whole lot better these days. She’s clean though shaved down, there was no choice. Still has some places that need trimming but even she has limits to her endurance. At first I didn’t think or care if she was housebroken but now that she’s recovering she’s choosing to go outdoors to potty. I’m never confident to say it’s a permanent thing but so far, so good. Her coat’s pretty thin, except for her Bichon tail (without much fur at the moment), she looks more like a poodle but is Bichon in disposition, very friendly but doesn’t have that bit of haughtiness you’ll sometimes find in poodles. She wants to be with people and is interested in everybody and everything. At the vet’s she thought the Amazon Gray parrot was wonderful, much to the distress of the parrot, lots of activity, it was grand. I was so happy to see her care, I’d have paid money to see the show! She does have some cataract activity but it doesn’t seem to be affecting her sight yet. Her female infection seems to be fading rapidly now that she’s getting antibiotic and isn’t starving to death. She’s eating very well, weighs about 11 lbs., not at all fussy, and loves her big pillow. For her to still think someone’s arms are a good place to be, I’d say she really deserves her name. I’m putting a picture here so you can see her. Sincerely, Sandy 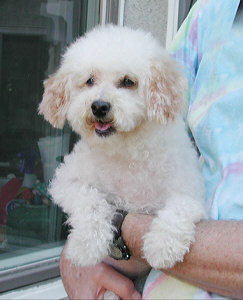 Grace is going home today!
To all the people who met me when they said I was “Dead” at the shelter on Labor Day, I would like to announce that today I’m well enough to go from my foster mom’s to a new home in San Diego. I don’t know if the lady will keep me forever but she’s thinking she’ll foster me and maybe keep me forever if I’m a good girl. Well, my mom says I’m the best and even though I have some troubles with my little body, I can come right back home if everybody isn’t happy, including me. She says it’s a really happy thing but her eyes are leaking so I don’t know what’s up but I hope she doesn’t say there’s something sad to look forward to or my fur’s gonna be drenched. All your prayers got me to look like this so please keep me in your prayers and wish me a very happy life. Love, Grace