Gem of the Day: 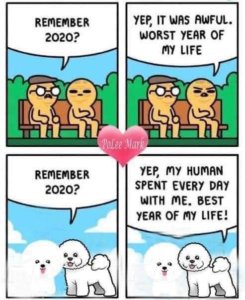 Thank you all so very much!

We are going to make those funds go as far as we can for the following new rescues!

But first, an update on Snickers with the perianal hernia. Thanks to you, we did surgery and had it repaired.

Snickers is doing wonderfully and next week, one of our long time volunteers and adopters, is flying in to Chicago to take him back home to Florida to his forever home, where he will want for nothing.

Deb Smith went through a terrible loss of one of her older Bichons and has decided to give a home to another senior, and it’s Snickers! Happy Dance all around! Thank you Deb Smith!

Next, meet the newbies! 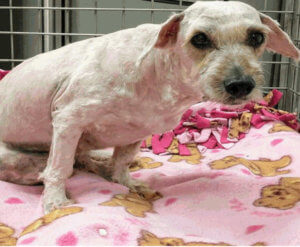 We were contacted a couple of weeks ago from the shelter in Austin, Texas about ANOTHER one who had been hit by a car and had two broken pelvic bones and needed surgery right away.

This was a few days after we did surgery on Bracco for the same thing! $6000.00! (By the way, Bracco is doing wonderfully too, after his surgery. Now we just have to get his Heartworm disease treated.)

But the funds weren’t the worst part about this second hit by car boy.

We couldn’t find an orthopedic surgeon anywhere near there.

Emergency Hospitals were all full and diverting to each other. No one was available and Winston could not travel far.

Then the most amazing thing happened.

While I was explaining all of this to the shelter director, and asking for her advice, she said, “You’re not going to believe this. The shelter has an orthopedic surgeon who comes in once in a while and he just walked in. Let me see if he can operate and fix this dog’s injuries.”

I asked if they had an estimate for us and she didn’t know what I was talking about.

I explained that I would need to raise funds for him and she told me, “Robin! The city of Austin pays for the shelter to do these kinds of surgeries when we have a surgeon here!”

And just like that, falling from the sky, a Board Certified orthopedic surgeon repaired it and the cost was absolutely zero to us.

After his surgery, the shelter needed the space and Winston needed to go to Medical Boarding for post op care, rehab, and for his shelter quarantine.

Between our South Texas Team Leader, Jody Ferraro, one of our South Texas volunteer’s, John Freidman, and myself, we called 16 different vet’s offices in or around Austin.

NONE of them were taking in any new clients and all were backed up 3-4 weeks.

What did we do? You know when God closes a door…we found a window!

It’s called “A Crate Escape”!   Veterinarian-Owned & Operated. And they do Medical Boarding which is what he needed.

It’s $85.00 a night, but he is being rehabbed with sling walking, and getting all of his pain medications. This is a beautiful facility and we are so grateful! Winston will be fostered near Dallas. He’s be up for adoption after he is healed and grows some of his hairs back! 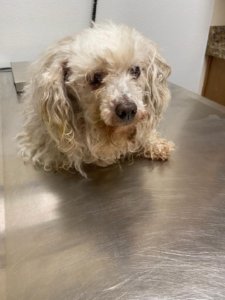 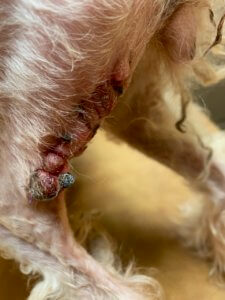 Sophie had a benign mass on her front leg and the shelter vet removed it. Well,  it got infected.

When we got her to our vet, Dr. Shepherd at Roanoke Hospital in Roanoke Texas, cleaned up her incision yesterday after spaying her and cleaning her teeth. He said he cleaned up the incision on his nickel. Just for us. My hero! 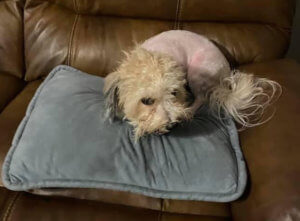 3. Meet three year old “Daphne” in St. Louis Mo. She came from a shelter in Il, near the border of Mo. 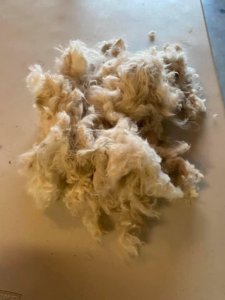 Daphne’s Hairs. (When my own Bichons go to the groomer’s, they all say they are going to get their “hairs” cut. I guess it stuck.)

We aren’t real sure what Daphne is mixed with but when we saw these mats, we said, “She’s coming with US!” 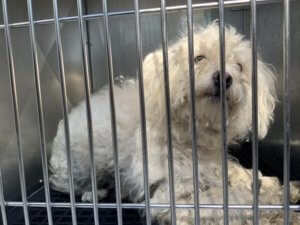 They say he is very sweet, though he was matted to the skin.

Sailor got a shave and a haircut, two bits! He feels much better! And, he smiles!

5. Next, meet 10 year old Heathcliff. He was rescued from a shelter near Chicago.

It’s amazing that he could smile like that with that ear infection on both sides. It is being treated now and has to be sent out to be cultured. 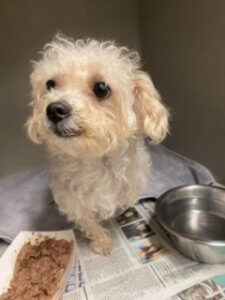 6. Meet 3 year old Tia. She was owner surrendered to a Chicago shelter to be euthanized for skin issues but they called us and we have her now. She will be available for adoption soon.
Lastly, I need to end with some sad news.
Over the years, many of you have heard me refer to long time Small Paw volunteer and supporter, Deborah Berger, (normetski@aol.com) and her celebrity Bichon, Boris Berger. 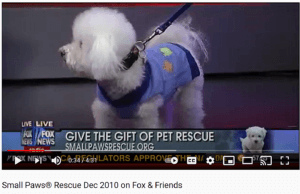 This YouTube video is one of our appearances on Fox and Friends, from back in 2010. Boris stole the show. He was a regular at Fox. 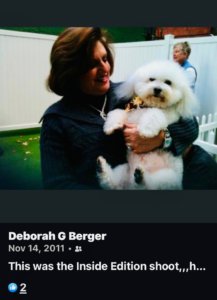 In this Youtube Video, Boris is being held by Board Member and National Team Leader, Joanne Raus, during filming for Inside Edition with Deborah Norville back in 2011. 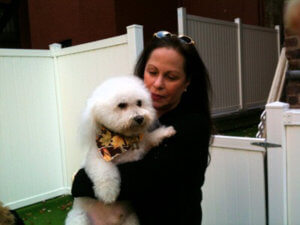 Deborah Berger and her precious boy, Boris, filming for Inside Edition. 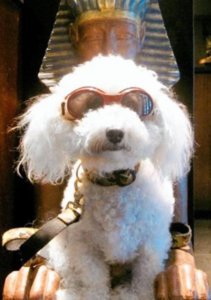 “I will miss his wisdom and kindness to all my fosters and other rescues. So many thanks to Dr. Hack and her incredible / compassionate staff. I’d be remiss if I didn’t thank Robin Pressnall, founder of Small Paws Rescue. You arrived as the male version of Apple Annie and became a celebrity appearing on Fox and Friends, and Inside Edition multiple times. You studied very hard and became known as the professor. Your sage wisdom was always appreciated. You won the love of every male dog’s fantasy, Miss Daisy Flynn. It took mama Flynn
a while before accepting you. But when she did you were in like Flynn. (no pun intended). You transitioned so quickly. That’s because your good Karma points were overflowing. Thank you for making me a better guardian and person. I’ll miss your big sloppy kisses but I know you’re in a better place❤️. My love for you and the others is eternal because we live in a timeless universe❤️.”

I knew Boris and was so blessed to have been in his presence several times, both in New York City and in Florida, at one of our Bashes.

I know that everyone believes that their Bichon is the best in the world, and they should!

But Boris truly was larger than life.

There was something about his personality that just emitted joy and a seeming wisdom.

Please pray for Deborah and her husband, Bill.

They are also looking at saying goodbye to their Yorkie, Albert, very soon, as he has lung cancer. It’s just too much. 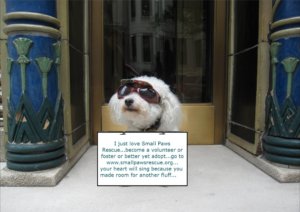 Goodbye, my celebrity Bichon friend, a great ambassador for Small Paws Rescue and for rescue dogs everywhere. We will hold you tight on the other side. All My Love, Robin 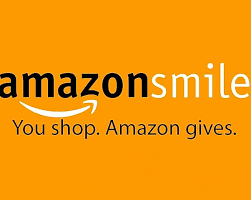 This email is to notify you that Small Paws Rescue Inc (EIN: 73-1576021) has been issued a $1254.56 donation from the AmazonSmile Foundation as a result of AmazonSmile program activity between January 1 and March 31, 2021.

The donation was deposited to your organization’s bank account on or before May 22, 2021.