Skip to content
Home / News / Newsletter / From Robin. I, Personally, Need a Favor. Please Read. Regarding Previous Bashes and The New Small Paws Event Happening in September in Destin, FL. 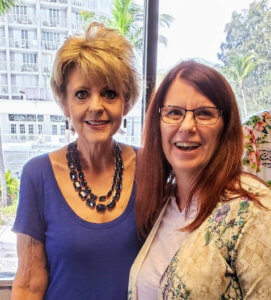 Cathy McCoy at The Florida Bash Dinner in March, 2019.

I want to introduce you to a great lady, Cathy McCoy of Niceville, Florida. Her e-mail address is cathymccoy@earthlink.net. Cathy has been with us for 21 years. She’s offered to do something for Small Paws that is quite wonderful, unbelievable, really, in Destin Florida, in late September and we are all very excited!

As many of you know, for 21 years we have been supplementing our fundraising efforts for the rescued  Bichon’s veterinary bills with Bichon Bashes held all across the country.

Over time, one by one, those bashes have stopped for various reasons.

We used to have a great bash in the Pacific Northwest in Sequim Washington on the beautiful property of Small Pawser, Bonnie McGill.

We would raise an average of $5,000 at this Bash. Bonnie Ferguson, our Director of Adoptions, and I had a wonderful time meeting all of the Small Pawsers from Oregon and Washington and the Pacific Northwest.

Sadly, Bonnie passed away and no one else had the time to keep this Bash going.

Then we used to have a large Ohio Bash at the home of Sandy Danklefsen. As the years passed, Sandy became ill and could no longer host the Bash. We would raise an average of $5,000.00 at this Bash, too.

Then, we used to have a HUGE Midwest Bash in Valparaiso, Indiana. That Bash would sometimes bring in up to $7,000 for the Bichons! After several years the organizers became too tired to continue.

Unless you’ve done it, you can’t possibly understand how much work goes into putting on a Bash. Months of planning, securing a location, getting permits, planning food menus, etc.

We still have the annual Okie Bash, here in Tulsa, Oklahoma, coming October 18 and 19, 2019. But we don’t raise funds at this bash. The Small Pawsers who come to Oklahoma from all over the country, spend so much already, just to get here, paying for on site lodging and for meals.

Then we have had a wonderful time over the years at the Florida Bash held in Pinellas Parks, Florida. We would raise an average of $5,000 at this bash as well. We held this bash in March of this year, 2019 near Tampa Fl., about six hurs from Destin.

You can see how many tens of thousands of donation dollars have been lost over the years due to the Bashes not being held. There was a time we could count on $30,000 a year coming in just from the bashes.

After the last Florida Bash, we learned that the volunteers who participated in hosting it, were tired as well, after working so hard for the last 15 years or so.

That’s where Cathy McCoy comes in!

We thought we could maybe try a new location in Northern Florida for the next Florida Bash.

Several things were an issue right away. We usually hold the Florida Bash in the Tampa Fl. area, in March, before it gets to hot down in Florida. And you know that summers are hot, the further south you go. There are also plenty of dog friendly hotels for our use, there in Tampa.

Cathy, who lives on The Emerald Coast of Florida, in Destin, Fl., told us that Spring wasn’t going to be possible.

Destin is a small town of around 14,000 people, and between 25,000 and 60,000 TOURISTS converge on this tiny town every spring, and hotel reservations need to be made at least a year in advance. Every venue was already reserved. Spring was going to be a no go.

But FALL, oh yes! Fall still has beautiful weather, yet it’s off season and this possibility was starting to become a reality.

Read Cathy’s Bio below, and you’ll understand how we have been blessed beyond belief with her talents and her contacts.

Cathy raises funds for The American Cancer Society. She knows how to do this on a larger scale and she is volunteering her time to give us a wonderful NEW event! It will be larger and very different from our traditional Bichon Bashes, yet smaller than New Year’s Eve in Time Square. Ha! Let me ‘splain, Lucy.

“Cathy McCoy has been an active volunteer and supporter for Small Paws® Rescue, since they were founded in 1998.

In addition to her activities surrounding Small Paws, Cathy is also active with several charity fundraising events along the Emerald Coast.

The American Cancer Society holds an annual gala, the Cattle Barons’ Ball, in cities across the US. This gala is the largest single fundraising event for the ACS each year.

These events are attended by 400-500 people and raise donations in the hundreds of thousands to millions of dollars per event.

Over the last several years, Cathy has served on the Silent Auction Committee, chaired the Volunteer Committee, and acted as an ad hoc Co-chair for the event held in Sandestin, Florida.

Cathy is also an active volunteer for the Destin Women’s Club, a philanthropic association which supports local area charities serving families and children in need. They hold several fundraising events each year. She is currently serving as Co-chair for the Silent Auction Committee for their November 2019 fundraising event.”

Let me explain how this event will be different than anything we’ve EVER done, and this is where I am asking or your help.

We do NEED some of our Small Pawsers to be there WITH THEIR BICHONS, at this event and this is why.

Cathy is pulling out all of the stops to raise funds for Small Paws. She has a list of celebrities and of people who love to become involved with organizations like Small Paws Rescue. People she has worked with before. This is NOT going to be your Grandmother’s Bichon Bash!

The public is invited as well as well as their friendly pups, and the atmosphere will be festive, with games, music, a costume contest, and a food vendor.

A live auction, which is a part of every Bash, is being held.

The name of the event, The Small Paws® Rescue 1st Annual Charity Festival, was developed specifically for the donating public to get excited! The registration price of $15.00 includes lunch and participation in the games. Cathy is calling sponsors to cover the cost of this event.

The dog loving public, from New Orleans to the West to Miami to the East is targeted with press releases.

An online link has been developed for people to purchase advance registrations. (See Below)

Flyers will be released in local markets by several Small Paws volunteers in New Orleans, Biloxi, Mobile, Pensacola and the Emerald Coast communities.

A full page story and ad will run in the September issue of the Emerald Ladies Journal!

Cathy looks forward to hosting the event and is hoping Small Paws volunteers from across the US come to participate in this very exciting event.

Remember, this is NOT just going to be us. But yet we NEED some of us and their Bichons to be there to show the public what we have made our mission in life, saving these precious Bichons. Bonnie Ferguson and I are planning to attend and we hope to see those of you who couldn’t get all the way down to Tampa.

Cathy, THANK YOU for loving Small Paws so much that you are giving up your summer for this very special event,  The Small Paws® Rescue 1st Annual Charity Festival!

I sincerely hope that some of you can come with your Bichons or we are going to have to rent some! All My Love, Robin 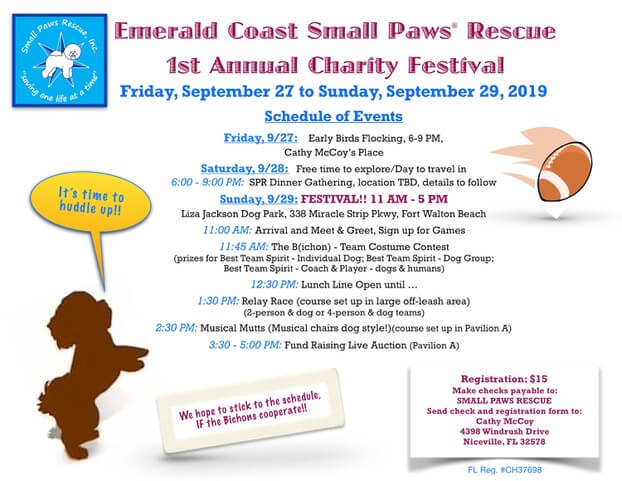 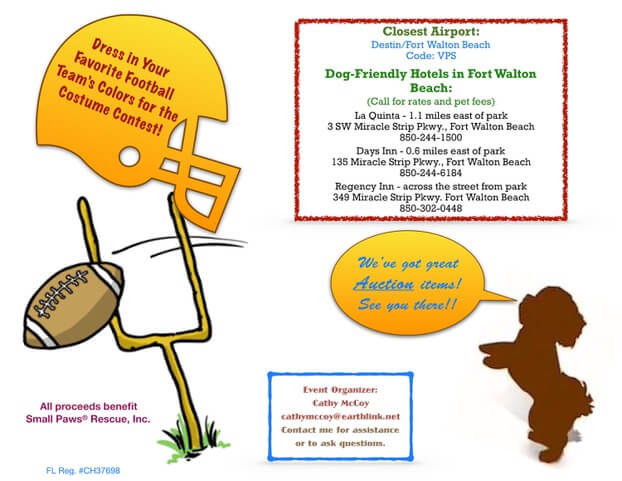