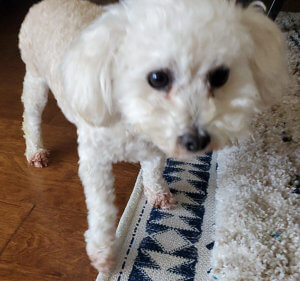 Pup had a spinal tumor. We did neuro-surgery, today.

Thanks to all of you, we were able to have little “Pup’s” spinal surgery done today.

The surgeon, Dr. Michael Orencole, DVM, DACVS-SA at the The Dallas Veterinary Surgery Center, called me while she was under and still on the table.

The MRI report eluded to the tumor being on the outside of the spinal cord.

Instead, after he opened her up, he saw that it was INSIDE of the spinal cord.

He said we had three choices and I pray to God that I chose the right one.

The first is that he could close her up and wait for the tumor to grow, putting more pressure on her spinal cord until she was paralyzed and couldn’t bear the pain, resulting in euthanasia. I didn’t care for this choice at all, thank you very much.

The second was that he could take a piece of the tumor for a biopsy. He recommended against that, because if it was malignant, it would have spread by now and she’d be dead.

The third choice was for him to go into the cord and try to get it. He said sometimes they peel right off and he was hoping this was the case. BUT, with this choice, we wouldn’t know what kind, if any, of neuro deficits she may have.

This is the choice I made. Number three. He said if it were his dog, that’s what he would have done.

He called around noon and the good news was that the tumor peeled right off. He got it all.

He said we won’t know if she has any neurological deficits until later tomorrow.

But the other choices weren’t really choices. So that’s where we are about little Pup. Please pray for her!

Next, it’s been hard for me to keep m mouth shut about something wonderful that has happened to Small Paws, and I’m still now allowed to tell you!

But a national media outlet, has chosen to let Small Paws be a part of one of their largest programs of the year!

That’s all I can tell you until the media release gets here! Mmmmm, mmmm, mmmmm! Wild horses couldn’t drag it out of me!

Well, ok. Maybe I can tell you this much.

We’ve done episodes for this Network two other times in our 24 1/2 years.

That’s it. That’s all I’m allowed to say until we get the press release, but know this. It’s exciting!

Ok, that’s everything for now. More news as it happens! Robin

Hello Robin: Yes we absolutely have to get that mass removed. I will make a $200.00 challenge and hope someone matches me very soon.
This would be a good opportunity to  be grateful for our own healthy little fluffs.
As always sent with love, Dawn

And from our Texas Team Leader, Michelle Morgan, at mrmorgan@kw.com, we have this challenge for $200.00! Michelle, thank you for all that you do! I hope that someone is home and can match your challenge for little Pup!

“Robin, I’d like issue a challenge of $200 to help little Pup get her surgery so that she can live her best life!, Michelle”

And next, from Deborah Berger at normenski@aol.com, we have this challenge for $100.00! Thank you Deborah! Is there anyone who can match Deborah?

And from Mary Jo Coc at maryjocox@me.com, we have this challenge for $100.00! Thank you Mary Jo! Is there anyone who can match Mary Jo?

I will issue a $100 challenge to help Pup have a pain free Holiday Season.

Mary Jo
Thank you all! All My Love, Robin

First of all, thanks to all of you who participated in our recent online Holiday Auction, which raised $10,533.00! Thank you to Jody Ferraro for being our great Webmistress!

So for those of you who have been following the auctions for years, you know it takes a while to get the funds into our Small Paws Rescue account.

Second of all, it’s Thanksgiving week and many of our people are already leaving to visit friends and family.

That’s why I’m trying to get the word our about this while we still have people who are home and can help.  I’m praying there is someone home who can help. 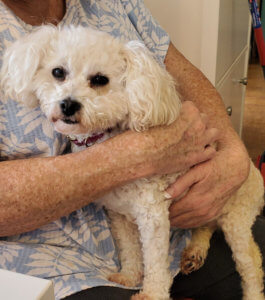 We have a situation and her name is “Pup”. She was already named “Pup” and we didn’t want to take that from her. She’s being fostered with Mike and Sally Montgomery at jmikemontgomery@gmail.com.

I first told you about Pup, who weighs only 9 pounds, when she was surrendered to a shelter in Texas for extreme pain, back in the summer.

We raised funds for her to have a CT scan to see if we could find out what was causing constant pain in her back.

It was inconclusive. Boo-Hiss.

So we have had her on major pain meds, including compounded pain meds due to her small size, just to keep her comfortable, until we could get a certain diagnosis.

Pup has a large mass extending the length of three discs L4, 5, and 6.

But here’s the thing.

The surgeon, Dr. Michael Orencole, DVM, DACVS-SA at the The Dallas Veterinary Surgery Center, says he does up to four of these types of spinal surgeries a week and he that feels he can get it, without paralysis. He feels she can be a normal dog without pain.

He said if it was malignant, with as large as it is, she would be dead already.

This is a video of Pup, shuffling along in pain. She cries out. The mass is growing and will continue to grow until she is paralyzed, but in too much pain to keep her going.

We HAVE to do this surgery to relieve her pain, or we would need to be having a serious discussion about her quality of life.

I can’t tell you how many times over the last 24 1/2 years that I’ve asked you all to climb the invisible staircase with me, building a step at a time, until we can all walk to the top.

This time, with little Pup walking up with us.

I don’t know how many times I’ve asked, but by climbing that staircase with me, we have accomplished many beautiful and wonder filled things, over the years.

With God’s help, we’ve put dogs back together, when no one else would have even tried. But you tried. And no, many of you are loving and living with those dogs, today.

She deserves a chance to be out of misery and live her best life. Will you walk up that staircase one more time, so that we can give her that chance? I’m here and will issue all matching donation challenges.