Small Paws® Rescue. Bichon Frise Rescue Nationwide. Because Chipper lived, over 16,000 Bichons and Bichon Mixes have been rescued and placed by Small Paws® Rescue as of this writing, January 29, 2021.

My name is Chipper! (AKA Chip,  Chippy, The Chipster, Chiparooney, and The Chipmister!)

Chipper!! That’s ME!! Official Paper Shredder, at your service!!

I was born on February 19, 1998 in Webb City, Mo. until my Mom and Dad rescued me, and then my Mom told the WHOLE world about the horrors of puppy mills. I was lucky to get outta that place!

Now, live in Tulsa, Oklahoma, with my Mom and Dad, and brother’s, Bear, and Mozart!
I love shreddin’ that paper, and doin’ the “blitz”!! (That’s when I run through the house, as fast as I can, makin’ a “grrrr” sound, and turnin’ 360 flips!!) Makes Mom and Dad double over laughin’! 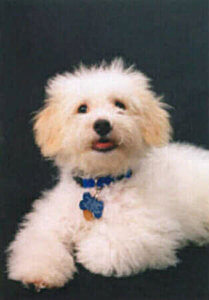 This is my first ‘ffessional picture! The photographer said Mom should put me in COMMERCIALS!! 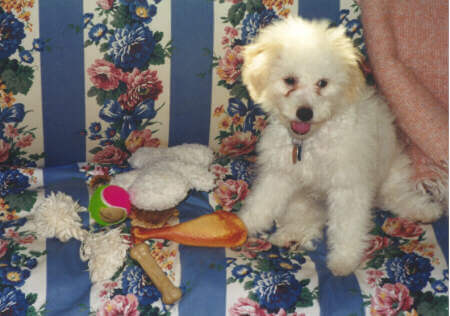 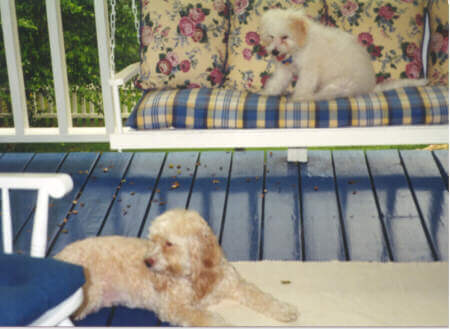 Here I am, out on the back porch, with my brother, Bear! He’s six! My Mom, and Dad, and him, were real sad when they ‘dopted me. Bear’s big brother, Nicholas, crossed The Rainbow Bridge, ‘cuz he had cancer.
Canine Lymphoma: Nicholas’ Story

I call him , “Nicholas, the PERFECT!!” ’cause I’m always hearin’,” What are you DOING?! Nicholas NEVER did THAT!!” Mom tells me I’m helpin’ to heal her heart!! 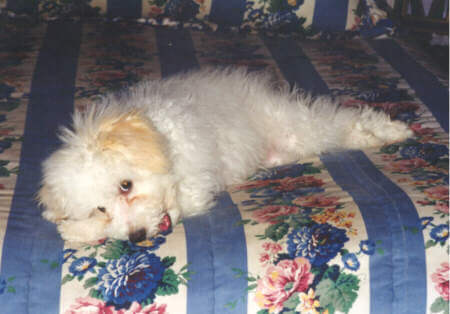 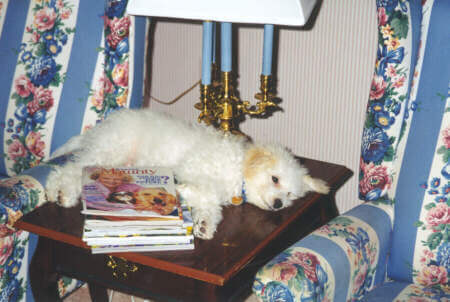 Sometimes, I like to pretend I’m a KITTY, and I sleep on the end table!!

Mom never had a puppy that does this! 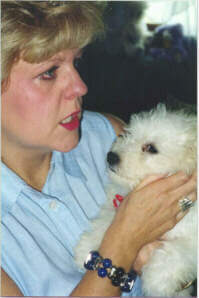 This is the first time my Mom held me! She started cryin’ ’cause she had been missin’ Nicholas The Perfect. I think I’ll keep her. 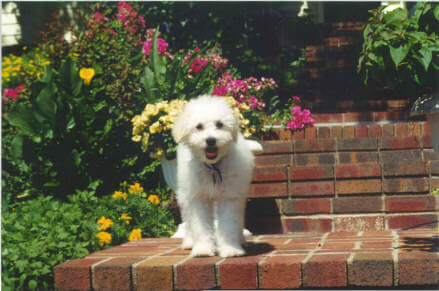 This is me, in front of my new house. People say the flowers have never looked so good!

I guess it’s my eyes that brightens ’em up!

Well, thanks for visitin’ me ! Are you SURE you have to go? 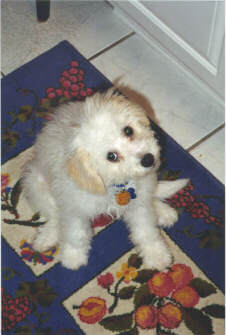 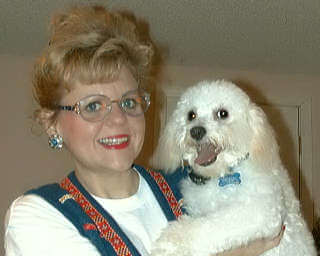 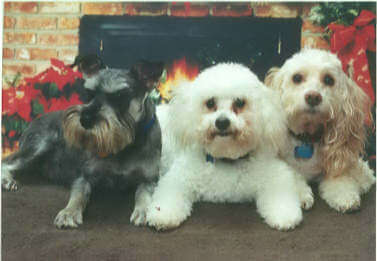 WOW!! It’s Christmas time already!! My FIRST Christmas!!! Here I am , with my brother,Bear, and my NEW brother, Mozart! He is a schnauzer!! Him and me WRESTLE!! YIPEE!! Mom found him, on the side of the road, with a HOLE in his side.. I WUV Mozart! 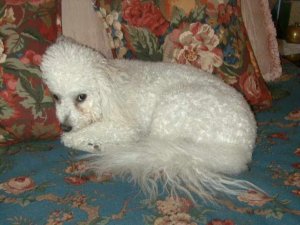 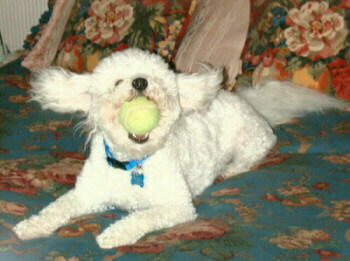 I taught myself, to THROW the ball, HIGH, in the air and then CATCH it! 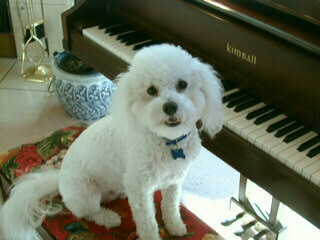 Mom thinks I pose real good at the piano…
I got’s a dumb duck, now, too… Duck Story
Here is some of my buddies..
Mary Ann & Max, a Bichon Frise Page
Meet AWL my Buddies, in the AOL Bichon Brigade Parade!! 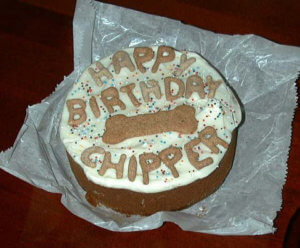 This is my cake, that my Aunty Stacie sent to me in the snail mail. 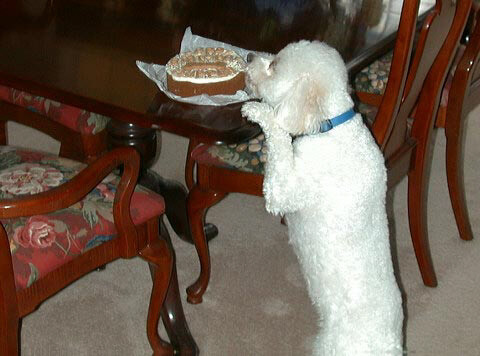 Well, as you can see, I have the life of Riley. Come back and see me real soon!

A Note, from Robin, Chipper’s Mom.
Chipper was a puppy mill rescue baby. He was 12 weeks old, and the wholesaler didn’t want him. He was “too tall”, for the pet shop, so he was left behind. He was at a Missouri Puppy Mill, and was advertised on the Internet for $75. I knew nothing about puppy mills or how they worked, even operating legally being licensed through the USDA.

Well, it was SO bad, I acted like I was NOT in shock, and asked to see the Daddy and Moma, AND to take their pictures, “JUST for Chippy’s album”.

I checked their licenses, and they had so many violations, AND they didn’t FIX their violations when the inspector had come back.

Finally they were forced to shut down. I TRIED to purchase Chip’s mom and Dad, that day, so “they could all be together”. but they would NOT sell them. I think they were on to me, by then. Notice the metal collar on his Mom, pictured below. It looks like she is telling him, “GO, Son.. this is your chance to get OUT OF HERE. Don’t worry about us. We will be fine.:(“ 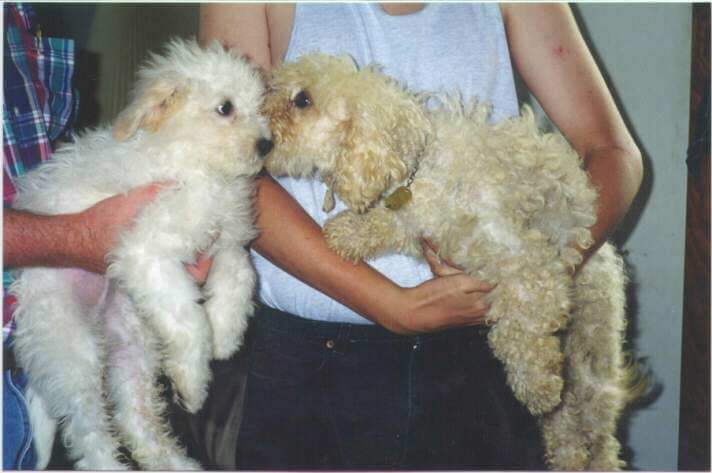 Chipper’s Mom, a Puppy Mill Dog.
Baby Chipper (on the left) and his poor Mom, say “Good-bye”.
P.S. When this mill was FINALLY closed, we did get Chipper’s Father, and named him :Louie”.
Chipper’s Mom didn’t survive.

Those collars do NOT come off. You have to cut them off. These dogs do not have a name, only a number. 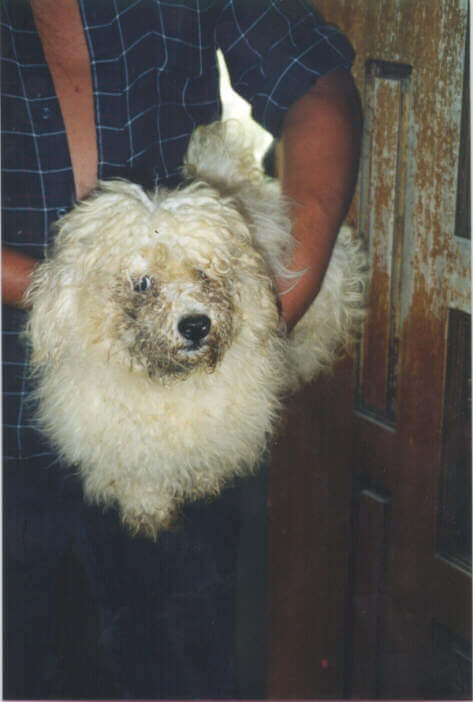 Chipper’s Daddy had a look of stark fear, and there was nothing I could do, except turn them in to USDA. (The smell of something dead, was rampant there)

Chipper’s Daddy, who we later got into rescue! He is now known as Louie, and lives in Pennsylvania, with one of our volunteers!

I offered those people (and I use the term LIGHTLY) $500.00 for them, at first for BOTH..and then, while Dale’s eyes got BIGGER and BIGGER…$500.00 a piece..(He would have gladly paid, to get those babies OUT of there) but they said no and they were staring to get suspicious which didn’t bother me, because I knew, if it was the last thing I did, they WOULD be shut down,..and they finally did close down, in late October.

I have since driven past the property. VERY rural. Very dirty, and back in January, there was a “For Sale by Owner” sign out in front. I think of those poor dogs, everytime I love on my precious boy. This was just outside of Webb City, Missouri, and thank GOD, this was their only pair of Bichons. They had EVERYTHING else, Weinie Doggies, Lhasa’s, Shih Tzu’s Poodles. You name it, if it fit in a LAP, they sold it.:(

Cherish your new petstore pup –
Stand always by his side.
Mend his ills and give him hugs
And lots of fun car rides.

Feed him well and let him run
To build his body strong.
Play with him and give him treats.
Love him his whole life long.

You’ll soon become his hero.
He will not ask you for much.
He’ll trade his lifelong loyalty
For your kind word and touch.

Count him among your blessings,
As you are his blessing, too,
But then please do just one thing more
When every day is through.

Take time to look into his eyes
Each night you tuck him in.
I bet you’ll see reflected there
Two other pups like him.

They’ve never had a family,
Soft bed, good food, nor fun.
They live life out in a wire box –
And never get to run.

They suffer searing heat at times,
At others freezing cold,
As weeks and months and years drag by
While they are growing old.

So think about his mom and dad
Who shine there through his eyes,
And remember all the mill dogs
Who are paying with their lives.

If they had ever had a chance,
They’d have grown up like him, too,
With years of love to give and get
Before their lives were through.

You’ll never see them face to face –
Such miracles are rare –
But pray for your pup’s mom and dad,
‘Cause someone ought to care..