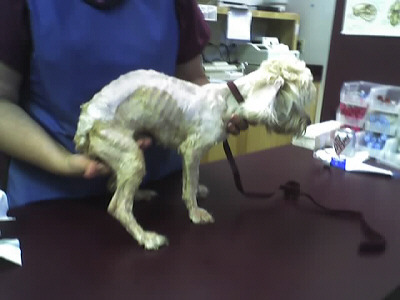 Read about the plight of one little dog, and how he told the world about the abuses and neglects happening in the Irving, Texas Animal Shelter. Also read how the Mayor of this town chooses to refuse to hear about these abuses.

The story of Irving from the Hospital
August 29, 2006
Irving his survived surgery!

Dallas Morning News:
Irving gets an earful from animal advocates over shelter policy

HEADS UP, IRVING
(Scroll down to Sept 6 to see the recent update on the Larry Powell blog. This is the 3rd update from Larry

Read our first newsletter to our members about little Irving from Irving, Tx.
https://www.smallpawsrescue.org/newsletters/images/august2606.html

The “Time Line” as supplied by our volunteers, Linda Kilby and Marilyn Brewster.
https://www.smallpawsrescue.org/newsletters/images/irvingtimeline.html

The second newsletter to our members.
https://www.smallpawsrescue.org/newsletters/images/august2806.html

The newsletter sharing the results of the City Council Meeting and how the Mayor left the meeting before we all spoke.
https://www.smallpawsrescue.org/newsletters/images/sept1006.html

Read letters written to the Mayor and City Council from citizens of Irving.
https://www.smallpawsrescue.org/newsletters/images/irvingletters.html

Read a web page made by the leader of the Irving Animal Shelter Reform Group. This group knows more than anyone else about the atrocities happening in this shelter, and about the lack of action of their Mayor, Herb Gears.

I am SO excited about this quilt I just had to send you some pictures. I wrote to Jane McDonald last week and said I’d like to make Irving a special quilt, and here it is. 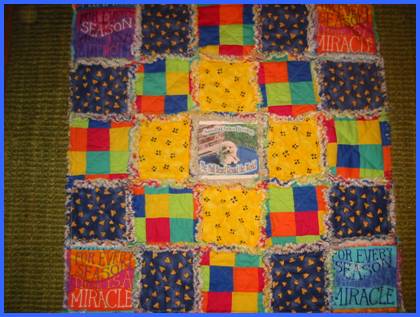 I chose special fabrics for this special boy, including some “Small Paws” around his picture, and a blue print with hearts for all the hearts he touched through the newsletter and the media. In the corners is a fabric that says “For Every Season There Is a Miracle”, for he is surely OUR miracle. 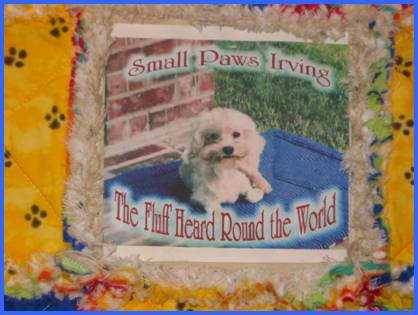 Here is his picture in the center. I am so proud to be part of the group that let his little voice be heard. 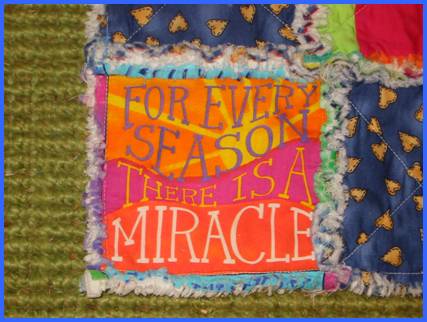 My own little Small Paws miracle, Mack. He knows this quilt is headed to a very special fluff. J 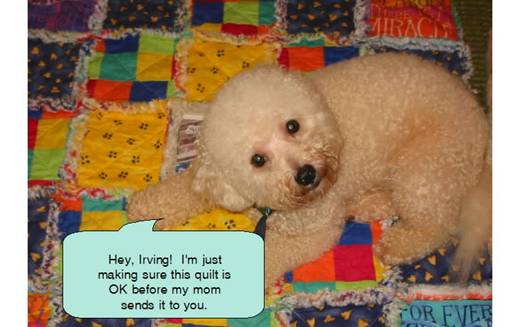 After witnessing the September 7, 2006 Irving city council meeting, I am > most interested in the Irving Animal Shelter Reform Group. I believe > anyone who witnessed that meeting would have to be interested in the > program for the reason some group must correct the abusive operation of the “shelter” since it is clear the mayor, city council and city manager have no interest in doing so.

I was in attendance at the September 7, 2006 city council meeting and > watched the performance of mayor Gears in which he constantly misstated the facts on the Irving Community Television Network as the cameras rolled after which he had those same TV cameras turned off thus depriving the citizens of Irving of hearing the truth about how his City of Irving
management has mismanaged the City of Irving Animal Shelter.

I have witnessed cowardly, bullying tactics by politicians and misuse of their positions, but this display of cowardice by mayor Gears topped them all. In the thirty-six years I have been an Irving resident, I have never seen a mayor or member of the Irving city council flee a meeting in the face of the truth. There have been many hotly contested issues come before the Irving city council but the mayors, regardless of which side of the
issue they were on, had the courage and guts to remain and face those who disagreed. Nor did any other mayor ever address an issue on TV and then turn off the “mike” or the TV cameras to prevent the truth from being heard by the citizens of Irving.

Further, I had never witnessed a city manager ignore the speakers and play with his toy as did city manager Gonzalez during the Forum. That was another record for rudeness by an Irving city manager.

It was also disappointing that the balance of the Irving city council sat like bumps on a log and went along with the mayor’s tactics rather than showing some courage, character, guts and leadership by having the Irving Community Television Network cameras turned back on so the citizens of Irving could hear the truth from eyewitnesses concerning the deplorable operation of the City of Irving Animal Shelter.

It is hoped the city council will find its backbone and not only stop the cruel and abusive treatment of animals at the City of Irving Animal Shelter, but act to stop the mayor’s cowardly and bullying tactics being used against Irving citizens who have legitimate complaints.

For those reasons, I am interested in the new volunteer program.

The Mayor is accountable to his citizens.

We sit patiently and still in every council meeting, with our cell phones silenced quiet, and sometimes we wait two-three hours for our chance of a mere whisp of time to speak with our Mayor.

Three minutes! Three short minutes to share something happy, or something extremely grievous to us. I’ve sat through many Citizen’s Forums this year, and only once before did I speak for nearly six minutes: but I was the only one speaking and they were very generous.

You may remember the council meeting only lasted a short 30-45 minutes as well. But even still, if we never are given a response from Mayor and/or Council during the two weeks leading up to the Citizens Forum, citizens are often angry or sad that there has been no response from their city leaders, and I’ve seen folks “run over” their time with an over-zealous presentation.

STILL, I’ve never seen the Mayor “bail” and walk out on “his people.” Never.

This sort of action tells me he was EXTREMELY angry that we disclosed publicly the situation at the shelter; or should I say, the “continuing” situations at the shelter.

This morning when I woke up, I was bothered again by the fact he fled City Hall, and how he had the council members lie to us, and how he [with a smile on his face] told the Channel 4 News reporter that he just got tired of listening and left.

I decided to resurrect my small knowledge of government to learn the accountablity of a city mayor. Bottom line……as you will see by the flow chart above…….the Mayor is accountable to us!

Just thought I’d throw this out there for you to digest it: Our Mayor is accountable to the citizens of Irving – we are the constituents, and he failed us.

I would expect he did this in an attempt to “teach us a lesson” about going over the three minute timeframe, especially with a topic as newsworthy as this one. He did it to “show us who’s boss” and to “put the fear” into us. [big, sassy grin]

I may bring a big GIANT timer to the podium at next meeting, who knows? But one thing is for sure: There WILL be a next time, and that NEXT TIME will be in two weeks. Hhhhhhhmmmmm? I think I just discovered what my next topic will be at the podium. Accountability.

UPDATE!
March 3, 2007
We celebrated Irving’s 6 month Birthday. It was 6 months ago that he was rescued in such terrible condition!

His new Mama, Jane McDonald, gave a
beautiful dinner party for little Irving. Though he is still in liver failure, and no one knows the future, on the night of his party he just felt wonderful!

Here are some pics! 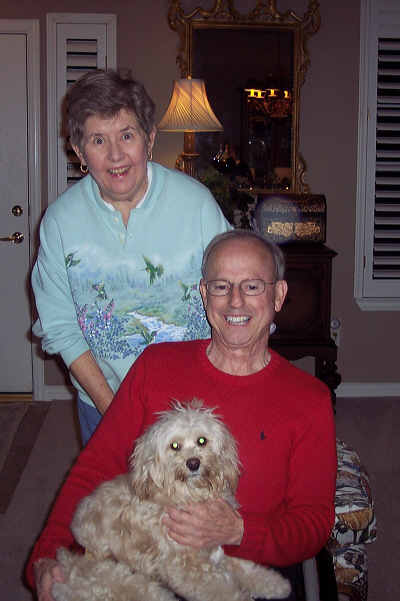 Irving with Don and Robyn Rorschach.
Don is the former City Attorney of Irving and was instrumental in bringing Irving’s plight to the public! 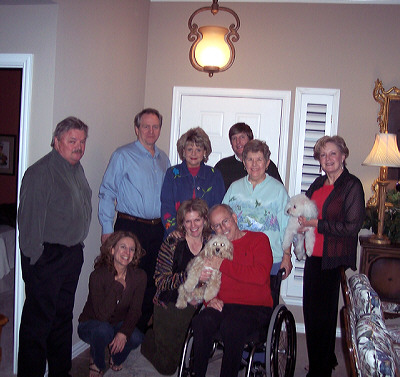 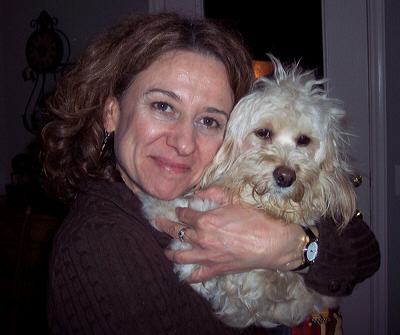 Linda Kilbe and Irving. Linda was the first one to
spot him at the shelter. 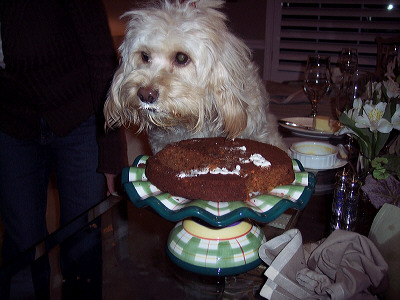 Irving dug into the organic carrot cake for dogs, homemade
by his Mama. We had to stop him so he wouldn’t get sick! 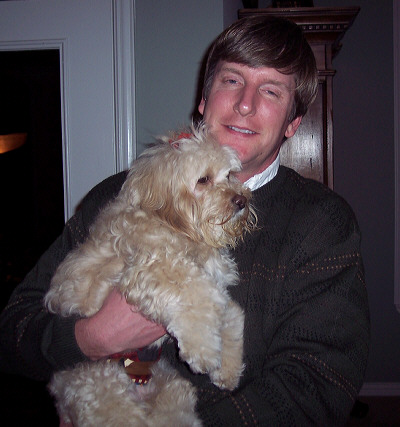 Irving with Bayn Carlson, who called down the Irving City
Counsel, and asked them to please stop talking and playing
with their computer games while he had the podium.
The school teach in him came out that night! 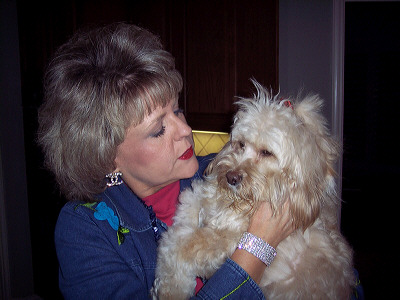 Your’s Truly with our boy. And a wonderful time was had by all!
Thank you Jane for a wonderful party and for
adopting this precious boy!
______________________________
September 15, 2007
Irving celebrated his one year “Birthday” since being rescued from the Irving Shelter by Small Paws! His adoptive Mom, Jane McDonald had a party at her home, which was also a fundraiser for SPR!

Here are a few pics! 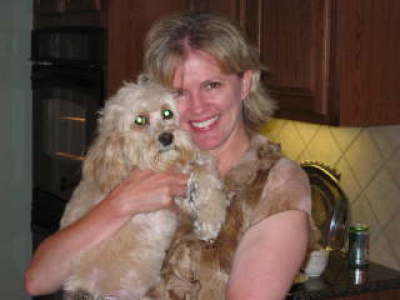 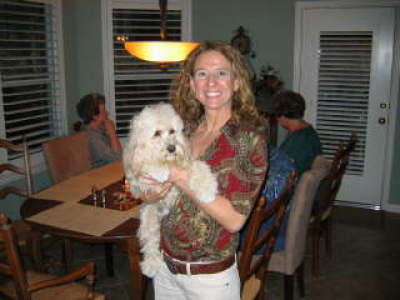 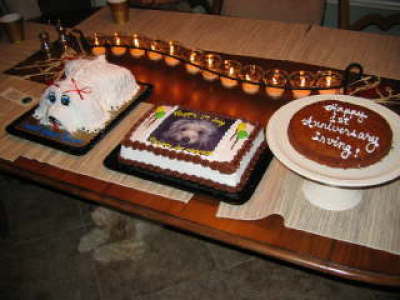 Irving had three Birthday cakes. Two for the humans and a carrot cake made for doggies for him! 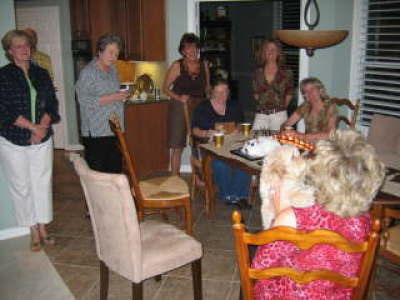 Irving is sung to by his Auntie Robin, and he wasn’t
any too happy about it, either! HA! 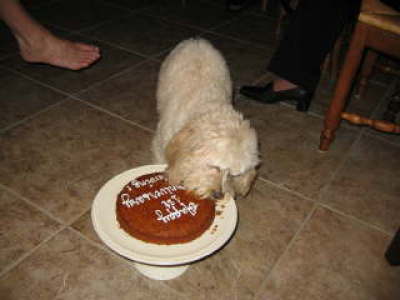 He didn’t want to hear songs. He wanted to eat CAKE! 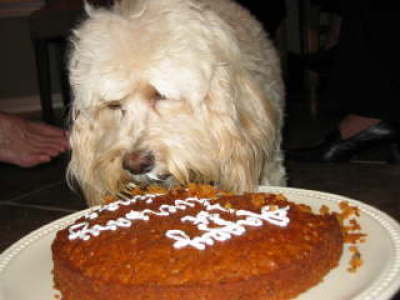 Our boy is still with us and is still doing well despite his poor prognosis when he first came to us. We look forward to more Birthdays with Irving, the dog with the bark heard around the world!

I am so pleased that you were able to make it to Irving’s 1st Anniversary celebration last weekend. And, I am also pleased to report that we were able to collect $580 in donations for Small Paws in Irving’s name. As I said in the invitation I would match all donations so I am enclosing a check for $620 to round out the “take” to an even $1200.

I would like to issue a challenge to other Small Paws participants to see if we can “grow” this $1200, in honor of Irving, into an even larger pledge for special needs and/or abused dogs. I would like to see the monies donated in Irving’s honor go to a special needs dog(s) just as he was. It would be especially heartfelt if that dog(s) was also liver compromised.

Irving has touched so many hearts and, of course, especially mine. My prayers are that he can, and will, continue to do so. My prayers are also that he will be here in another 6 months so that we can have his 4th birthday party celebration.
Sincerely,
Jane McDonald, Okie and Irving (my heart mate) 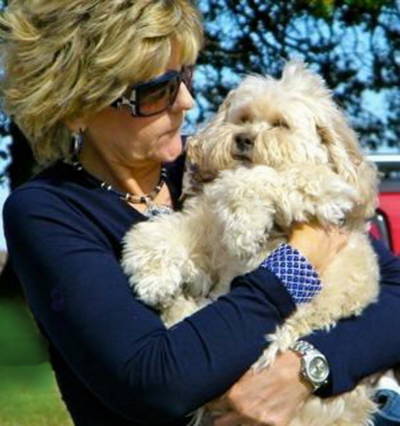 He continues to do well!