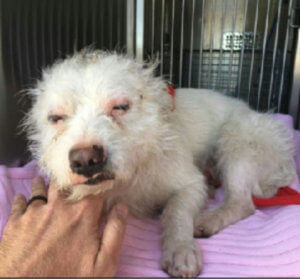 “Colby” came to us as an emergency, late yesterday afternoon, from a shelter near Dallas, Texas.

We have him at an Emergency Hospital, now. Please see below.

Gem of the Day: “”The two most important days in your life are the day you are born and the day you find out why.” ~ Mark Twain~

Our North Texas Team Leader, Rae Steeb, was contacted by a shelter near Dallas, yesterday afternoon.

This little 18 month old had been adopted for a month and then was returned to the shelter. 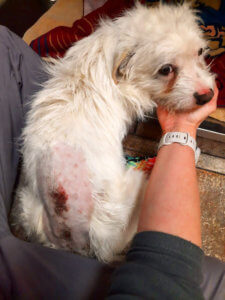 He was lethargic and has a deep wound/hotspot down his back. He acts like he doesn’t feel a bit good.

He needed emergency care, and that’s where we have excelled for almost 24 years, because of loyal supporters like you.

He is presently receiving medical care at The Emergency Animal Hospital in Plano, Texas.

The shelter and the vet tech said that Colby is shy and scared.

The shelter had placed him in a home with several happy, normal, playing, small children and now he seems to have PTSD.

So he will need to be placed in a home with adults or older, dog savvy children.

Colby won’t be ready for adoption for 2-3 weeks.

He’ll need to go through 10 days of quarantine at our regular vet, as he was at the shelter in general population.

We are hoping to move him on Monday to Roanoke Animal Hospital and Dr. Shepherd (The Great).

He’s already had his shots, (Colby, not Dr. Shepherd) but the ER bill is our biggest concern now.

First they had to sedate him to shave and debride the wound on his back.

“Debridement is the removal of dead (necrotic) or infected skin tissue to help a wound heal. It’s also done to remove foreign material from tissue. The procedure is essential for wounds that aren’t getting better.”

It is infected, so after blood work, he’s now on antibiotics.

So in honor of Valentine’s day tomorrow, we have the following matches challenges.

First, Mary Hurley at fuffernut@yahoo.com, has issued a “Happy Valentine’s Day” challenge for $500.00! Thank you so much Mary! Can anyone match Mary for little Colby?

Next, we have this challenge from Janet Bartos for $200.00. Thank you Janet and I hope that someone can match you!

Man, oh, man!  When it rains, it pours…precious fluffs.

I would love to issue a $200 matching challenge in honor of Valentine’s Day!  Happy 💜Day to all! Especially if your significant other is a white fluffy lap friend!!

Thanks for all you and all the volunteers do for the furr babies!  Love, Janet Bartos”

You know I don’t usually bother  you on a Sunday, but this is a medical emergency for little Colby.